Under the current arrangement when banks fail to hammer out a resolution, the matter is referred to the National Company Law Tribunal

The stage has been set for a major relook at banks’ inter-creditor agreements (ICAs), following suspension of fresh cases under the Insolvency and Bankruptcy Code (IBC). The Indian Banks’ Association can be expected to begin formal discussions with the wider banking fraternity over the next fortnight.

“The three-month moratorium, and the fact that a one-time restructuring may be needed, has triggered this relook,” said a senior banker.

Under the current arrangement when banks fail to hammer out a resolution, the matter is referred to the National Company Law Tribunal (NCLT). With this option off the table for the year ahead, existing ICAs have to take this reality into account. “The ICA is the only mechanism we have now,” said a top banker. 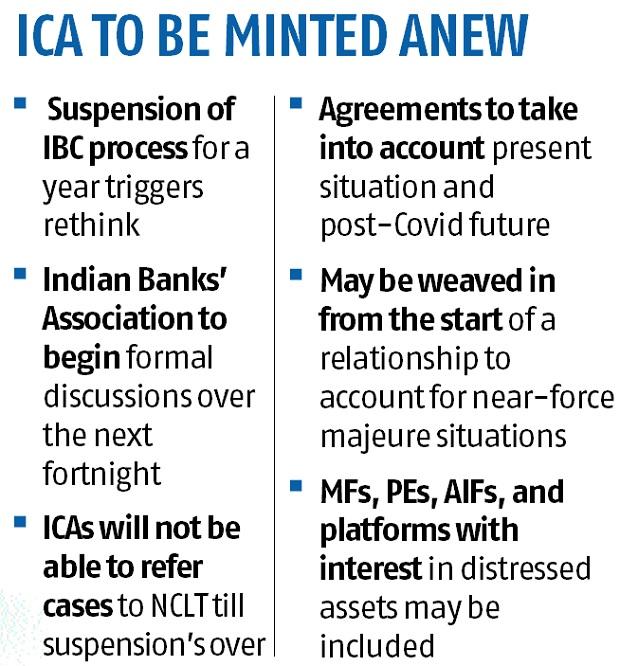 The mandatory ICA under the central bank’s June 7, 2019, circular was to empower banks to take decisions, and resolve bad loan issues without approaching the NCLT. The central bank’s stance all along has been to place the onus on banks to make the ICA work. The ICA had been weighed down even before the Covid-19 pandemic, and the Reserve Bank of India (RBI) was looking into the logjam.

Bankers are to consider tweaking existing ICAs to account for the present, and for the post-Covid future as well. The options — many of which were under review earlier in the context of the ICA logjam — may be back on the agenda.

These include the feasibility of weaving in the ICA right from the start of a relationship within the existing consortia, and multiple banking arrangements. This is to ensure there is visibility of what needs to be done when an account goes into default, or mired in difficulty.

The idea is to make the ICA more proactive, with clearly laid-down terms on where each bank stands when the assignment of security, and related issues come to the fore.

This is to ensure relative access to security and its seniority are laid out a priori.

An interlinked issue to be weighed is the widening of the ICA to include mutual funds, private equity, alternative investment funds, and platforms with interest in the distressed assets market. It was explained that there could be a case for continuity without necessarily widening the room for participants in the ICA by making it clear from the start (in specific ICAs) where various non-bank entities would stand in the queue. This way, they can take a call whether to take exposure to a credit or not.

The RBI’s Financial Stability Report (December 2019) says that based on a survey of 13 banks — with regard to assets that were initially assigned to be resolved through the prudential framework (as of June 30, 2019) — an ICA is yet to be signed for exposures amounting to Rs 33,610 crore, while the same has been signed with respect to aggregate exposures of Rs 96,075 crore. However, the resolution plan has been implemented only with respect to one borrower with a reported exposure of Rs 1,617 crore. The numbers quoted here exclude the cases being resolved under the IBC.