Only eight states will qualify for the extra borrowing, as they have to meet stiff conditions on ease of doing business.

States, if they meet all conditions, can borrow 5 per cent of their Gross State Domestic Product (GSDP), against 3 per cent allowed now

The extra borrowing provision for states has not unsettled the bond market much. This is because, according to a back-of-hand calculation, most states get automatically excluded, given the conditions.

Instead of rising on account of oversupply fears, the 10-year bond yield — on the contrary — closed at 5.774 per cent from its previous level of 5.78 per cent.

Soumya Kanti Ghosh, chief economic advisor of State Bank of India, noted that only eight states qualified for the extra borrowing, given the broad conditions on ease of doing business, power distribution rank, and number of urban local bodies. One nation, one ration card is a new point that states will take time to fulfil.

If all conditions are met, states can borrow 5 per cent of their gross state domestic product (GSDP), compared to 3 per cent at present. The existing ceiling of borrowing (at 3 per cent of GSDP) is Rs 6.41 trillion, of which states have used 14 per cent. The states get an unconditional rise of 0.5 per cent of their GSDP. 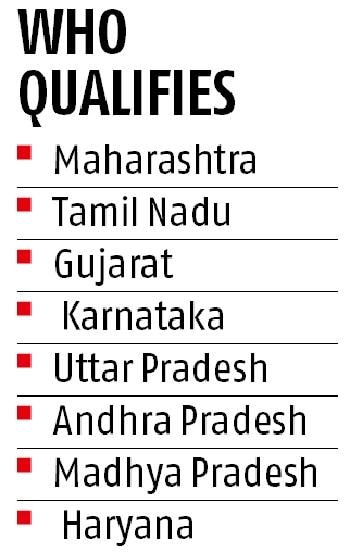 However, for the remainder, the conditions will be attached. Therefore, a 1 per cent increase in borrowing will be linked to specified, measurable, and feasible reform action. A further 0.5 per cent will be granted, once three of the four reform areas are met.

However, the calculation shows it will be hard for states to meet the goals, even during normal times.

For example, West Bengal and Odisha are not part of the UDAY scheme, and consequently rank low in the power distribution criterion, according to the SBI calculation based on state data. These two, along with Kerala, have a low urban local body count. Bihar, too, doesn’t qualify on most parameters. “Our research shows that out of 20 states, only eight are in the position to fulfil all conditions and can avail 2 per cent of their GSDP as extra borrowing. Hence, out of the Rs 4.28 trillion, we believe only Rs 3.13 trillion (73 per cent of the total available) might actually be availed of,” Ghosh said.

“We found that West Bengal, Telangana, Bihar, Odisha, Assam, Jharkhand, and Chhattisgarh need to fulfil the conditional ties to avail of the borrowing,” he added.

Given the conditions attached, it is unlikely that states will rush to borrow. But there could be some increase in supply near the year-end, which is usually when the borrowing happens.

According to the Centre, the provision will give states room for Rs 4.28 trillion in extra borrowing.

Meanwhile, bond yields are driven by the extent to which the stimulus package disturbs the government’s fiscal math.

“The markets saw that the stimulus package did not involve much of cash outflow, and relied on guarantees — full and part — and deferrals etc, and therefore were relieved as no big borrowing is likely,” said Harihar Krishnamurthy, head (treasury), First Rand Bank.

“Further, there is an abundance of liquidity — about Rs 7 trillion. Mutual funds are buying G-Secs, which are safest in terms of credit risk. Finally, the country downgrade fears have also abated, given the total package is below other country percentages,” Krishnamurthy said.

via Borrowing limit raised, but states won’t rush to make use of the chance | Business Standard News