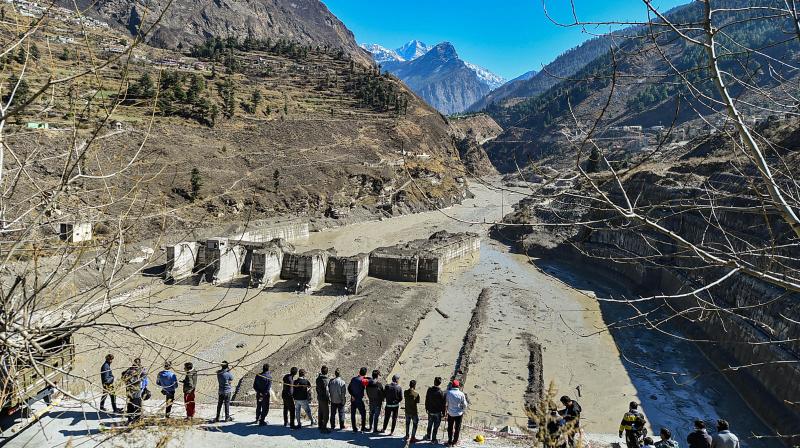 Melting glaciers are the clearest signs of climate change, and since this event took place outside the monsoon period, it is safe to assume human intervention was a causative factor. (PTI /Arun Sharma)

A tragedy of gargantuan proportions washed away close to 200 people, destroyed or damaged two hydroelectric dams and five bridges as the Nanda Devi glacier burst in Uttarakhand. The GLOF (glacier lake outburst flood) event that created a deluge of frightening proportions downstream in rivers was said to have been triggered by an avalanche on Sunday morning. The rescue efforts by over 2,000 members of the Army, police and paramilitary forces, and state and national disaster response teams have been heroic as the Himalayan state grappled with yet another tragedy like the 2013 monsoon floods in the wake of cloudbursts that killed nearly 6,000 people, which was the worst ever toll as muddy water poured down the gorges and drowned entire villages.

Ecologically fragile regions around the world are fraught with danger and the pace of development in sustaining a rising population trend, and man’s co-existence with nature has been threatened in the most basic ways. The fallout from deforestation is clear even as the more populated stretches of the Himalayas show how precariously man is perched on mountainous terrain. It is obvious that lessons have not been learnt from years of having to deal with floods from the monsoon or melting glaciers. It is against this background that the foolishness of building hydroelectric dams too close to glaciers must be viewed when global warming is seen to create havoc in the icy Himalayan upper reaches.

It is a specious argument that a state which has to purchase power in the region of Rs.1,000 crore a year must build dams in ecologically sensitive regions in order to save money. So long as the consumer pays for the power purchased, there should be no need for Uttarakhand to spend thousands of crores in building dams to generate electricity. They have been warned about this, including in scientific advice tendered to ruling party politicians. The era of building dams is truly over as man has learnt from experience that Nature is a force that can be overpowering when it is taken on or teased.

Himalayan efforts by a tiny state like Uttarakhand can’t by themselves reverse global warming but man can learn from the simple principle that Nature cannot be toyed with, particularly in fragile zones. Melting glaciers are the clearest signs of climate change, and since this event took place outside the monsoon period, it is safe to assume human intervention was a causative factor. It will be up to scientists to study the event and render an opinion on what may have caused it and it is entirely up to the administration in hilly areas to enforce laws strictly to ensure that ecological preservation rules are always followed lest such events recur.

Quick communication of the impending water flow may have saved hundreds of lives downstream of the Ganga’s several tributaries as many villagers were evacuated in time. The standard announcement of relief to the families of the dead followed a pattern which points to the government’s utter helplessness in dealing with calamities and in stopping human contribution to climate change. The bursting of a glacier in the Garhwal Himalayas is a chilling warning of what we may be up against if we continue to recklessly exploit our planet’s finite resources.