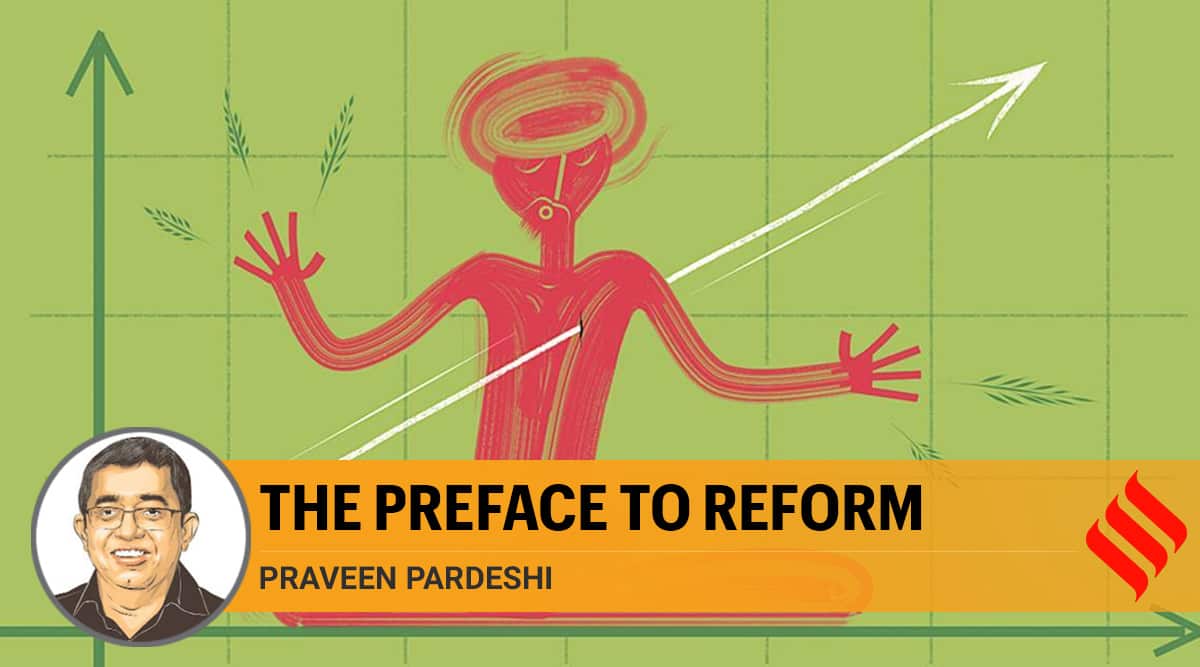 The need of the hour is to continuously communicate with those unhappy with the reforms. (Illustration by CR Sasikumar)

There was once a leading economic power whose textile and manufactured products ruled the world’s markets. But the country’s welfare policies enacted to protect certain sections were captured by select groups to preserve the status quo for decades. The great economic power declined, leading a new government to dismantle the entrenched “welfare policies”. Widespread protests followed, bringing the whole country to a halt. Naysayers (who today stand to lose the benefits from regulatory capture) are more vocal than aye-sayers, who are the silent majority and stand to gain due to more widespread growth. Does this sound familiar?

This is not the story of India but the UK. The winter of discontent of 1979 was followed by strikes by printers and coal miners. However, the government did not bow down and reforms continued. Within a decade, the “sick man of Europe” regained its stature as an economic powerhouse.

Is the current status quo good for a majority of farmers? An Indian engaged in industry or any aspect of the services sector (this includes a waiter in a restaurant) earns more than an average farmer. This anomaly is not common in all countries. So, despite all the pro-farmer laws and protection, why do farmers in India earn less? A recent study by RBI showed that a potato farmer gets only 28 per cent of what the consumer pays. Across all crops, the farmgate price is 40-60 per cent less than the consumer price.https://images.indianexpress.com/2020/08/1×1.pngP B Mehta writes: |A letter to the misunderstood men and women who are creating New India through Unity in Purity

The real challenge is how to encourage growth while protecting the poor. I argue that, first, a social safety net needs to be created to provide direct income transfers to the vulnerable and then factor markets involving labour and agricultural land need to be reformed to ensure productivity-enhancing growth. And how does India ensure growth which benefits the poor? Here, I argue that employment creating growth in the manufacturing and services sector is the only way to lift the poor out of poverty and enable millions to move to higher-wage productive jobs.

Despite a narrow tax base, India has created a comprehensive social safety net, which can cushion growth-enabling market reforms. India’s Food Security Act guarantees highly subsidised wheat and rice. Accurate targeting of food entitlements to the bottom 67 per cent through Aadhaar identification and digital ration cards paired with E-POS machines in fair price shops has considerably reduced the leakage of subsidised grains.

The National Social Assistance programme intends to provide direct income support to over 40 million elderly landless agricultural workers, poor women-headed households and families with physically-challenged children. Today, with over 18 million Aadhaar seeded accounts, a large share of this transfer is reaching the intended. India also provides income support annually to 145 million farmers, paying out Rs 75,000 crore. This benefits all farmers while MSP benefits only 6 per cent of farm produce.Opinion |Farm laws are only way to push agriculture out of low-income trap

The safety nets constructed on the back of Jan Dhan accounts, mobile connectivity and Aadhaar identification have improved the delivery of benefits in a wide range of sectors, from housing to scholarships. Of course, providing income support to all the vulnerable sections is still a work in progress.

But if state support for social safety net has to become sustainable, wide-ranging growth, which will broaden the tax base, is essential. India’s growth itself can be designed to reduce the number of people who need state support. The agriculture and labour reforms recently passed create the conditions for productivity-enhancing growth, benefiting millions of small farmers and unorganised workers.

Let us take a look at what the farm laws achieve and how they will change the status quo. The Green Revolution, along with public investments in irrigation and fertiliser subsidies, has expanded India’s agricultural production. However, farmers have not gained proportionately from production growth as 40-60 per cent of the value is appropriated by intermediaries. Status quo-ist laws have created this mess.

The stock limits under the Essential Commodities Act do not enable large tur or moong and rice processors to procure in bulk for their entire season’s processing requirements. This restricts large-scale processing units which can run throughout the non-harvest season. This draconian anti-farmer rule has now been done away with. This will enable the expansion of agro-processing and supply chains. A larger share of the produce procured for agro-processing increases its shelf life, enabling the farmer to retain a greater value.

A sad feature of Indian agriculture is that 30-40 per cent of the post-harvest value, particularly in vegetables and fruits, is lost due to inadequate storage, processing and transportation facilities. Removal of stock limits and the accompanying contract farming act will bring in investments to tap the wasted resource.

The second law, which amends APMC regulation, removes another distortion: Only traders registered in APMCs can buy farmers produce. Even though conditions for perfect markets exist, the APMC regulation creates this bottleneck. Intermediaries extract a greater share of value as they are price makers while farmers are price takers. This situation is further aggravated as farmers are restricted to selling within the taluka boundaries or limits of the APMC, and if they have to sell in other APMC, they have to pay the APMC tax.

The Farmers’ Produce Trade and Commerce (Promotion and Facilitation) Bill 2020 confines the authority of the APMC to levy fees and give trader licences within the boundary of the market yard. Farmers will continue to have the option to sell in APMCs but any private market/non-APMCs registered trader can also set up an agricultural market and compete with APMCs to buy the same produce.

Can some benefits of these regulations be seen? Karnataka implemented the Uniform Market portal in 2014, enabling trade across taluka APMC limits without APMC fees. An analysis by researchers at the MIT Sloan School of Management has shown that prices of many agricultural goods increased by 3.5 to 5.1 per cent. Significantly, profit margins of small farmers increased by more than 36 per cent.

Apart from agriculture, the abundance of labour is the second greatest comparative advantage of India. However, multiple labour laws instead of encouraging employment, have created disincentives for job creation due to high costs of compliance. While India’s employment elasticity with respect to GDP growth is only 0.2, China’s is at 0.44. Even for Bangladesh, the elasticity is 0.38.

To sum up, India’s prefacing of economic reforms with Aadhaar-enabled social safety nets and direct income transfer to the poor will pay off by enabling growth with a massive expansion in employment. The social safety nets constructed to ensure the right to food and direct income transfers to farmers will protect incomes of the vulnerable even as competition increases productivity and growth.

The need of the hour is to continuously communicate with those unhappy with the reforms to explain how the current status quo is hurting farmers and informal workers.

This article first appeared in the print edition on February 6, 2021, under the title “The preface to reform”. The writer is Global Programme Coordinator, Defeat-NCD Partnership, UN Institute for Training and Research, Geneva and former Mumbai Commissioner.