Sources across ministries confirmed that Narendra Modi’s call to “go vocal for local” will be achieved through a host of measures, running into the dozens, and will focus on long-term goals.

With the Covid-19 crisis showing no signs of abating, the government is aiming to provide tax incentives and other benefits to medical devices and pharma products, according to sources.

Pushing more micro, small and medium enterprises (MSME) into the manufacturing sector, doubling down on a list of non-essential imports that can be quickly produced domestically and laying off the tariff button for now will likely be the
government’s strategy to lower import dependence.

Sources across ministries confirmed that Prime Minister Narendra Modi’s call to “go vocal for local” will be achieved through a host of measures, running into the dozens, and will focus on long-term goals. As part of the effort, the MSME and commerce ministries are discussing a broad range of moves to push small businesses to foray into the manufacturing sector, where import dependence remains high.

Over the past two weeks, officials from the Commerce and Industry and MSME ministries have decided to give a renewed push to an existing plan to harness local production. Sub-sectors such as medical devices, pharmaceuticals, electronics, plastics, and low-end engineering goods, where small businesses can be encouraged through specific subsidies or policy intervention are currently in focus, a senior MSME ministry official said.

With the Covid-19 crisis showing no signs of abating, the government is aiming to provide tax incentives and other benefits to medical devices and pharma products, according to sources. MSME Minister Nitin Gadkari has said that medical devices and equipment like MRI machines, stents, and prosthetics can be manufactured at a fraction of the prevailing costs by domestic firms. India imports nearly 75 per cent of its medical devices, including for higher-end products that like cancer diagnostics, medical imaging, and ultrasonic scans. 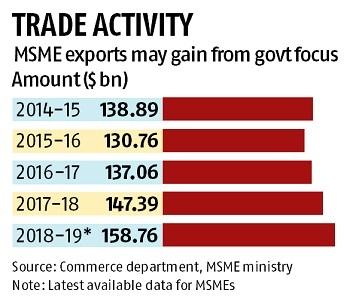 In September 2018, the Prime Minister’s Office asked the commerce ministry to prepare a list of “non-essential” imports after the rupee went into free fall and high global crude oil prices pushed up petrol and diesel prices to near record levels. However, the final list is yet to be completed.

An earlier plan to initiate investigations into the top 50 traded tariff lines, constituting 60 per cent of India’s imports, to find ways to reduce import dependence has again found favour and will be explored, officials said.

Expediting anti-dumping investigations into MSME products — complaints against which have shot up from domestic manufacturers — is also on the cards.

A high-level advisory group was also set up to control the ballooning trade deficit. But the group’s move to study imports from China will again be taken up, even if to identify cheaper sources, a person in the know said.

However, officials say the government is not keen on tinkering with tariff duties and imposing blanket restrictions on imports in key sectors, a growing demand from domestic industry.

“The global trading system is in a delicate position currently and any sudden attempts to control India’s existing import pattern would first need to take into consideration the business cycle for most of our exports that have been radically altered. Exports such as engineering goods, diamond and apparel rely on foreign inputs and often operate on low margins given the pressure of competition,” said a senior trade expert working closely with the government.

The government’s decision to not make drastic changes in import duties also rests on the possibility of repeated price volatility and supply side shocks in the case of key commodities over the next few months. “We need to have analyse trade flows and see the export data for May, when things are expected to start cooling down, before tariffs can be changed,” said a senior government official.