Shah Alam Khan writes: People who drove her to suicide have to be punished. But a society that refuses to condemn daily acts of coercion, injustice and violence is equally culpable for the crime. 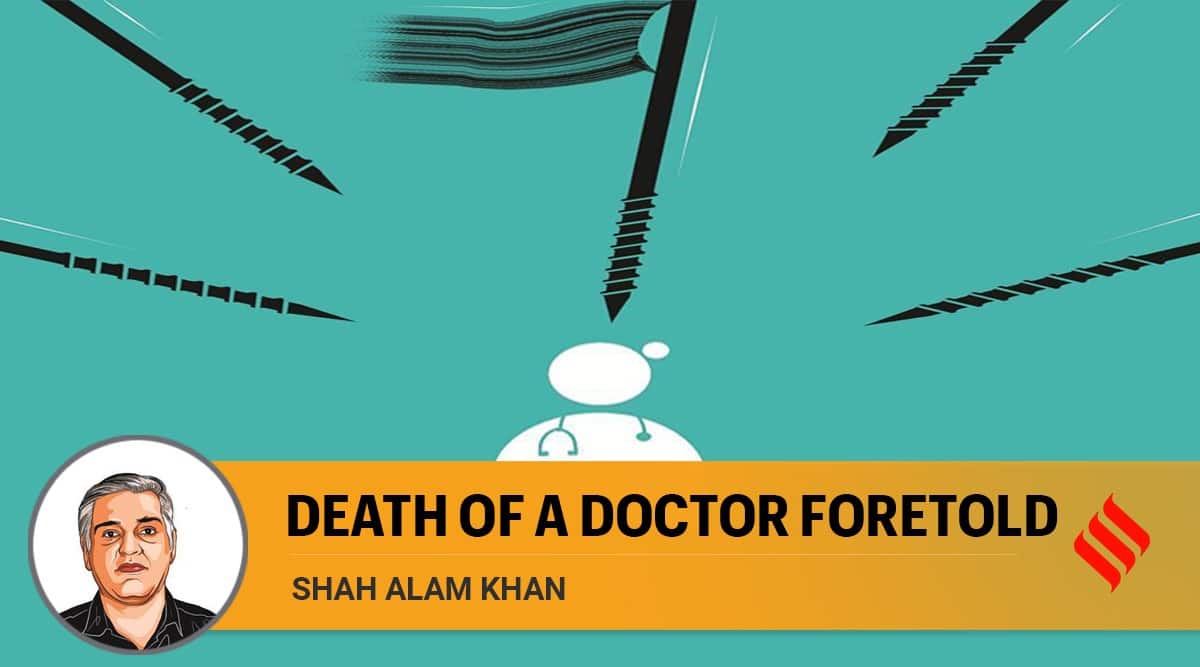 In a country where mental health issues are not just poorly understood but also inadequately addressed, the suicide of a doctor following harassment shouldn’t come as a surprise. (Illustration by C R Sasikumar)

Archana Sharma, a doctor who was booked for allegedly causing the death of a pregnant woman at a private facility in Rajasthan’s Dausa district, committed suicide on Tuesday. Her death has come as a shock to the medical and non-medical fraternity of the country. The doctor’s family has alleged that the FIR against her was instigated by the local political leadership.

Karl Marx once said that the suicide of an individual is the failure of the society as a whole. Nothing could be more appropriate in a country where every sunrise comes with brutality and every moonrise sees defeat in its most brutal form for millions of its citizens.

Violence and coercion form the essential fabric of our society. The concoction of force, threat and power is so toxic that the act of suicide in itself becomes an illegible footnote. In a country where mental health issues are not just poorly understood but also inadequately addressed, the suicide of a doctor following harassment shouldn’t come as a surprise. It should be clear to us that we live in a land where the biases of caste, gender, class and religion are ubiquitous and no one, including doctors, is immune to it. Despite the current ruckus regarding the death of a colleague, it is important — and sad — to mention that many among the medical fraternity are themselves impervious to the manifestation of violence, force and coercion until it happens to themselves or someone dear to them.

The criminal nature of those who drove her to take the extreme step is reprehensible. But we must remember that her suicide is not the first or the last of its kind — violent coercive actions often push the targets to end their lives. In our response to Sharma’s death, it is only appropriate that the emphasis is not merely restricted to the moral or psychological dimension but also on the social aspect.

This tragic incident reveals many layers of Indian society. We are a country which has turned deeply capitalist in a very short period of time. The influence of capitalism on our daily life is not only profound but acutely stressful. The very fact that the unfortunate patient in question had to seek treatment in a private healthcare setup is a glaring example of the failure of the public system. In the absence of a vibrant public healthcare system, violence and threats on doctors have significantly increased over the last couple of decades. The “paying” patient now demands “five-star” facilities. Doctors “sell” treatment and the patient has been reduced to a mere consumer.

We live in a country where the political leadership boasts to have “cleaned” up the system through encounters, where alleged criminals are killed in police custody. What message does such action convey to a poorly educated society, when patently illegal violence is condoned at the highest levels of the executive. The absence of justice is not only complemented by the ruling class but a sense of impunity is also sown in the minds of the masses. Should we be surprised that a doctor who is perceived to have erred is taken to task by the masses?

Most of my doctor friends who run healthcare facilities are understandably distraught at the suicide. But these same people were ignorant — or dismissive — of the suicide of Payal Tadvi, a doctor from a tribal community in 2019, who lived in Mumbai. She killed herself following harassment by caste-privileged seniors. It may seem unfair to compare the two tragedies, but we are forced to do so to glean insight into the way society functions and responds in a bizarrely complex country like ours. Whataboutery of this kind helps us in understanding the iniquity in our midst. As long as we continue to ignore suicides precipitated by some form of brutal browbeating, it is foolhardy to believe that the browbeating won’t happen with us. Every Rohith (Vemula) or Payal shall give reason to the cowards to push an Archana to take her life.

In India doctors are considered gods. This is unique. The anger of the Indian patient is also, therefore, unique. In 2012, a gynaecologist, T Sethulakshmi, was hacked to death by a man whose pregnant wife had died in her care in Thoothukudi. I can hardly recount such a murder from anywhere in the world. A part of this brutality arises from the breach of trust between the “god” and the “devotee”. This exclusive relationship is dangerous. Unfortunately, most doctors do not object to being worshipped as “god”. It gives them innumerable privileges. But this specious halo makes them vulnerable when they fail as humans.

Any suicide is a tragedy of unsurmountable proportions for the family. It has multiple ramifications for those left behind. Truly, it is the end point of the collective failure of society. Hence, its prevention begins within the society. Suicides which happen due to coercion and threat of violence are not truly suicides, they are murders committed by all of us. In India we harbour suicides in our shanties, colonies, homes, colleges, schools and professional institutions. We vote for suicide connivers. We worship power. We love the talk of death as a means of retribution. We are all waiting to participate in the next suicide. If we do not want that to happen, then we must raise our voice at every act of injustice, abuse, prejudice, threat and violence aimed at the ordinary Indian.