Subrata Mitra writes: NATO, aware of the very real threat of Russia’s nuclear option, cannot do more. And Russia, in possession of territory won at enormous cost, cannot do less. But there is a window of opportunity for India. 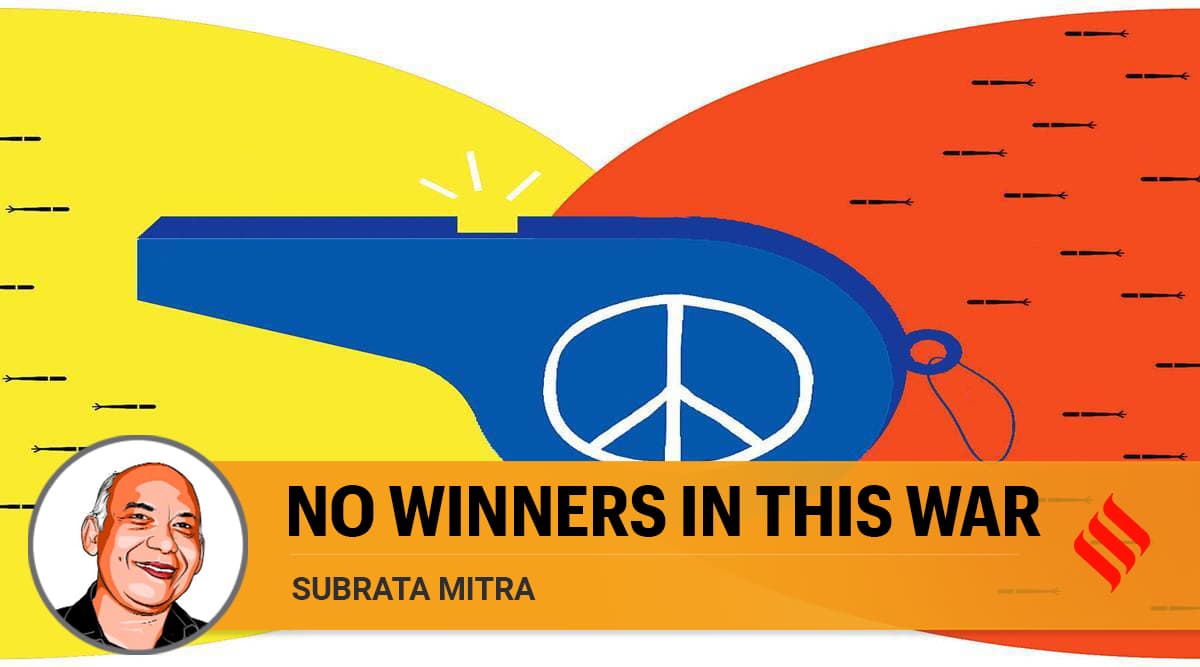 There might be a window of opportunity for India, which has consistently held dialogue and diplomacy as the only solution, to take the initiative towards mediation. Under Prime Minister Jawaharlal Nehru in 1953, post-independence India, a fledgling in world politics, had stepped in as a mediator in the Korean conflict. (Illustration by C R Sasikumar)

Over the past four and a half months, since the beginning of the Russian “special military operation” in February, the war in Ukraine has become the leitmotif of politics in the West. Solidarity with Ukraine and resistance against the incursion of Russian forces into Ukrainian territory are the main refrain of the Western media. The NATO, EU and G-7 have sprung into action, offering support of various kinds — from the supply of arms, intelligence, cash and logistics and training of Ukrainian troops, to imposing severe sanctions intended to “cripple” the Russian economy. Western troops have not been directly involved in combat so far but mercenaries of Western provenance are actively engaged, and some have actually been caught in action. Weakening Russia is the hidden agenda of the Ukraine war. President Joe Biden of the United States — who has vowed to stand with Ukraine “as long as it takes” — and Prime Minister Boris Johnson of the UK have been the leading spirits behind the mobilisation of the West on “both sides of the Atlantic”, to confront the “common enemy”.

The West has been at war before, in Vietnam, Afghanistan, Iraq, Libya, and Syria. But this is different. This is a war on European soil and a war of attrition that has pitted Western firepower against Russia. Unlike other wars, this one has snapped the flow of global trade, sports and cultural and scientific exchanges. The understanding at the end of the Cold War in 1989-1990 that NATO would not expand to the east was the bedrock of that new era. However, successive NATO expansions and the emergence of a more resolute leadership in the Russian Federation which has looked with alarm at the shrinking of its sphere of influence have radically altered the equations. Russian President Vladimir Putin articulated these apprehensions in a meeting with top intelligence officials in 2007 in his speech to the Munich Security Conference. But these warning signals did not elicit any effective, reciprocal moves at accommodating the apprehensions, nor were any new security arrangements made that could instil trust and confidence among adversaries. Seen in terms of structural realism, the war in Ukraine was a tragedy on hold that had to break out, sooner or later.

The war has not gone well for either party. The Russian blitzkrieg — with enormous lines of tanks crawling menacingly toward the capital city, with vastly extended supply lines — failed in the early attempts to take Kyiv and topple the Ukrainian regime. The Ukrainians, whose President Volodymyr Zelenskyy has emerged as the main symbol of resistance to what they have successfully projected as blatant aggression, have been able to hold on to their main cities. Western firepower, cash, intelligence and training have been successful in slowing down the Russian advance, confined so far to the East and the South. The war that most expected to come to a quick resolution has turned out to be a war of attrition, reminiscent of the brutal trench warfare and artillery duels of the First World War, evocative of the horrors that Erich Maria Remarque describes in All Quiet on the Western Front. The media brings the horrors of the war into daily life, reviving living memory of the wholesale destruction of cities in the Second World War and the subliminal fear of the depredations of the Red Army in occupied Germany and Nazi atrocities in Russia and France.

The war in Ukraine has rung the death knell of globalisation. Chancellor Olaf Scholz of Germany — a reluctant war leader who had previously been a conscientious objector — has now been goaded into radically altering German policy with regard to military spending, pledging 100 billion euros into upgrading the armed forces and sending German weapons to Ukraine. He has aptly described the current phase in world politics as a Zeitenwende — a “watershed”, the change of an era. The weaponisation of trade by both the West and Russia, euphemistically described as “sanctions”, are actually war in other forms, which still cost lives. The wholesale confiscation of assets in Western banks and financial institutions and the very public delivery of lethal weapons take the edge off the moral rhetoric of war to regain peace — they are steadily undermining trust in global institutions. Inflation caused by the sanctions has started biting into the budgets of low-income households all over the world. And rising gas prices have already started inducing fears of a winter of discontent in Europe. A less visible effect of the sanctions is the impact on the environment. Substituting oil and gas with coal is a potentially dangerous trade-off which will turn the clock back on the painstaking efforts to rein in global warming.

Except for the military-industrial complex of the United States and its global subsidiaries, which are cashing in on the vast sums of taxpayer money made available to them by western governments, there are no winners in this war. One can already discern the wavering of public support in continental Europe for the continuation of the war and a growing divergence among Germany, France and the UK. For the war machine in the United States, a proxy war against Russia, with the added advantage of support from NATO and Western countries which it did not have in its earlier efforts, is a golden opportunity. But as things stand, NATO, aware of the very real threat of Russia’s nuclear option, cannot do more. And Russia, in possession of territory won at enormous cost, cannot do less. The tug of war between the US-led supply of arms and intelligence and the resourceful and resilient Russia, with its own memories of similar challenges in the Second World War, can only drag on, indefinitely.

The time for resuming negotiations is now. There might be a window of opportunity for India, which has consistently held dialogue and diplomacy as the only solution, to take the initiative towards mediation. Under Prime Minister Jawaharlal Nehru in 1953, post-independence India, a fledgling in world politics, had stepped in as a mediator in the Korean conflict. With the dexterity that current Indian diplomacy has shown – successfully repatriating vast numbers of Indians from Ukraine at the outbreak of the war, keeping a line open to Russia and the United States, and retaining its strategic room to manoeuvre — Modi’s India has the potential to get the warring parties to the negotiation table. Some Ukrainian and Russian lives might still be saved.