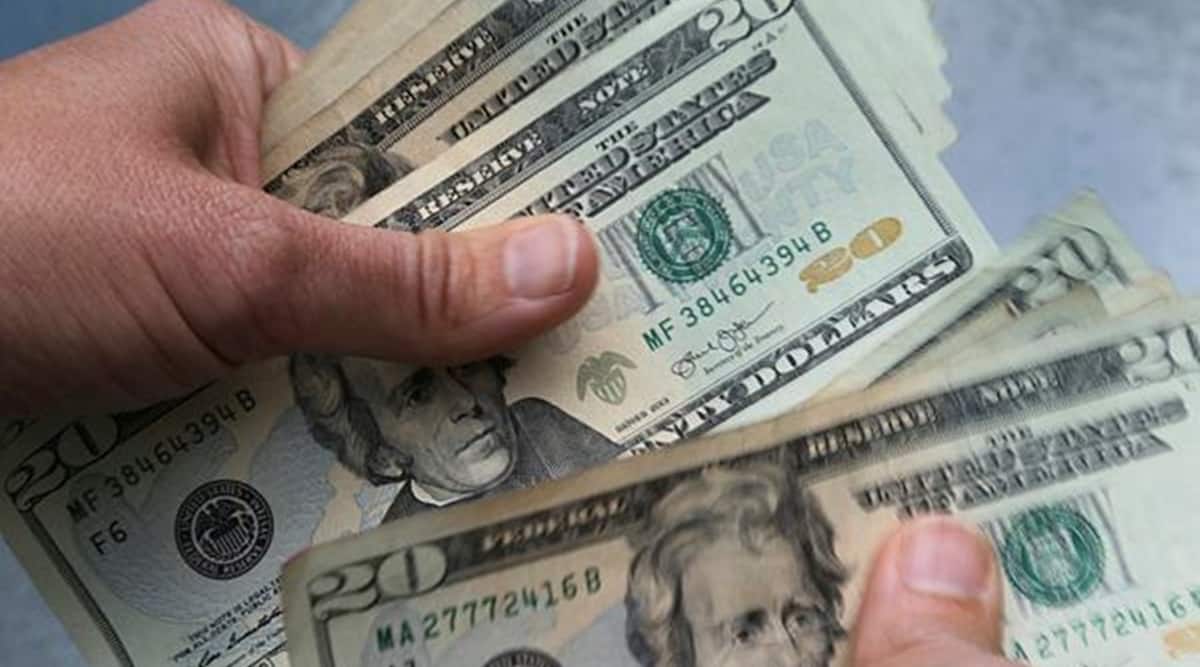 The “de-dollarisation” by several central banks is imminent, driven by the desire to insulate them from geopolitical risks, where the status of the US dollar as a reserve currency can be used as an offensive weapon. (AP Photo)

Much has been written on how the weaponisation of trade, the imposition of sanctions and the exclusion from SWIFT by the US could trigger a faster de-dollarisation as countries displaying diplomatic and economic autonomy will be wary of using US-dominated global banking systems. This school of thought avers that this can also trigger a shift in the overall global forex market framework as potential foreign policy coercion or sudden disruptions will not go down kindly with countries, which will start exploring how to build bulwarks. The US dollar, which is the world’s reserve currency, can see a steady fall in the current context as leading central banks may look to diversify their reserves away from it to other assets or currencies like the Euro, Renminbi or gold.

The “de-dollarisation” by several central banks is imminent, driven by the desire to insulate them from geopolitical risks, where the status of the US dollar as a reserve currency can be used as an offensive weapon. Thus, the war in Ukraine and the subsequent economic sanctions will trigger central banks to go back to their drawing boards to reassess their dependency on the greenback. Efforts are already underway for the possible introduction of a new Russia-China payment system, bypassing SWIFT and combining the Russian SPFS (System for Transfer of Financial Messages) with the Chinese CIPS (Cross-Border Interbank Payment System).

The notion of de-dollarisation sits well in the thought experiment of a multipolar world where each country will look to enjoy economic autonomy in the sphere of monetary policy. Leading geopolitical adversaries of the US — Russia and China — have already started this process of de-dollarisation. Other smaller powers are also joining the ranks. India has also had to work out alternative arrangements, including a barter arrangement, with certain sanctioned countries in the past.

Russia had started its three-pronged efforts towards de-dollarisation in 2014 when sanctions were imposed on it for the annexation of Crimea. First, Russia reduced its share of dollar-denominated assets to about 16 per cent in 2021. It had already announced that it would be cutting the USD from its $186 billion National Wealth Fund. Second, it reduced its share of trade conducted in USD by prioritising national currencies in bilateral trade. The use of USD in Russia’s exports to BRICS crashed from about 95 per cent in 2013 to less than 10 per cent in 2020. Third, Russia also developed a national electronic payments system called “Mir” in 2015 after several payment processing firms denied services to Russian banks.

However, these steps haven’t sufficed to effectively shield “fortress Russia”. China, on the other hand, aims to use trading platforms
and its digital currency to promote de-dollarisation. China has established RMB trading centres in Hong Kong, Singapore and Europe. In 2021, the People’s Bank of China submitted a “Global Sovereign Digital Currency Governance” proposal at the Bank for International Settlements to influence global financial rules via its digital currency, the e-Yuan. The IMF has already added Yuan to its SDR (Special Drawing Rights) basket in 2016. In 2017, the European Central Bank exchanged EUR 500 million worth of its forex reserves into Yuan-denominated securities. However, the lack of full RMB convertibility will hinder China’s de-dollarisation ambition.

Despite these efforts, the US dollar continues to reign, having sealed its position in the early 1970s with a deal with the oil-rich Kingdom of Saudi Arabia to conduct global energy trade in dollars. The status of the dollar was enhanced by the collapse of the Bretton Woods system, which essentially eliminated other developed market currencies from competing with the USD. This status of the reserve currency allows the US government to refinance its debt at low costs in addition to providing foreign policy leverage. Currently, about 60 per cent of foreign exchange reserves of central banks and about 70 per cent of global trade is conducted using USD. The association of the USD as a “safe-haven” asset also has a psychological angle to it and like old habits, people continue to view the currency as a relatively risk-free asset. Given this psychological bias, the world will continue to prefer the USD as a “store of value” and a “medium of exchange”, fulfilling the basic functions of money. Additionally, sudden dumping of dollar assets by adversarial central banks will also pose balance sheet risks to them as it will erode the value of their overall dollar-denominated holdings.

Thus, despite triggers to the move away from the dollar, in reality, it will be a protracted process. Apart from the Euro and gold, most other foreign currencies have some inherent risks associated with them. With the historically “neutral” Switzerland joining the EU in imposing sanctions on Russia, it eliminates the Swiss Franc from being an asset that can work as a hedge against economic sanctions.
Central banks are left with very few choices to diversify. Having said that, a drop in the dollar’s stature is inevitable as major economic powers like China and India rise. The western hegemony of the financial system was challenged when the 2008 global financial crisis exposed underlying cracks within the US economy. Moreover, demographic factors will continue to challenge Europe’s growth prospects. The rise of Asia as an economic powerhouse will raise the importance of currencies like the Yuan and the Indian rupee. But, while the frequent use of the US dollar as a potential weapon for achieving foreign policy objectives will no doubt accelerate the process of de-dollarisation, there is still a long road ahead.