Despite the market turmoil, the Organization of Petroleum Exporting Countries and its allies are sitting on the sidelines

Crude markets have suffered a run of extreme volatility, with prices soaring in the wake of President Vladimir Putin’s invasion of Ukraine

Oil pulled back in London, after earlier nearing $120 a barrel, on speculation high-stakes talks to revive a nuclear deal with Iran may soon conclude.

Benchmark Brent crude swung in a range of almost $10 on Thursday, at first pushed higher as buyers continued to shun Russian crude, then dragged lower as a tweet by journalist Reza Zandi suggested Iran may be close to signing an agreement. US and European officials have also said a deal’s close, but that there are still sticking points.

Crude markets have suffered a run of extreme volatility, with prices soaring in the wake of President Vladimir Putin’s invasion of Ukraine. Buyers have been avoiding Russian crude as they try to navigate financial sanctions, while refined-product markets have also seen prices surge.

A top official from the International Atomic Energy Agency will meet with Iranian leaders on Saturday, according to an IAEA report seen by Bloomberg, suggesting progress toward resolving some of the key remaining issues. 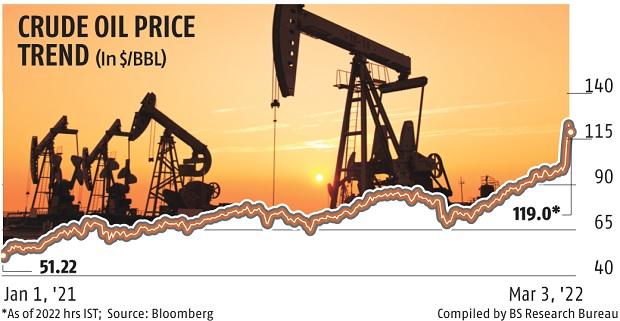 Surging oil costs have added to the inflationary pressures on the global economy, boosting the prices of everything from gasoline at the pump to diesel used by industrial consumers. German Economy Minister Robert Habeck said on Thursday that he’s against the idea of a ban on imports of Russian energy, while reiterating the urgency of the need to reduce reliance on Moscow for supplies.

Despite the market turmoil, the Organization of Petroleum Exporting Countries and its allies are sitting on the sidelines. The group stuck with the 400,000 barrel-a-day production increase that was scheduled for April and wrapped up a Wednesday meeting in a record time of just 13 minutes, delegates said.

The International Energy Agency has warned that global energy security is under threat and a planned emergency release of crude reserves by the U.S. and others has done little to quell market fears.

“Although Western sanctions have not gone as far as to ban Russian exports, the country’s supply of crude oil and products have clearly been affected either by ‘self-sanctioning’ or because financial punitive measures make it impossible to finance oil trade with Russia,” said Tamas Varga, an analyst at brokerage PVM Oil Associates.