Assam to be a ‘laboratory’ for mother tongue-based education: Dharmendra Pradhan 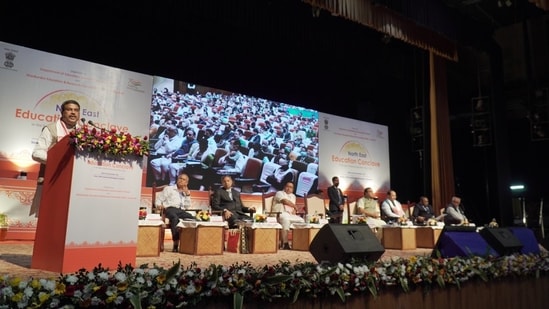 Union education minister Dharmendra Pradhan on Saturday said that there are plans to make the state of Assam a “laboratory” for a unique “caste, tribe, and language-based education system”.

Speaking at the inauguration ceremony of the North-East Education Conclave 2021 in Guwahati, the Union minister said that all the northeastern states together inculcate as many as 180 languages – which makes Assam, a key state in the region ruled by the Bharatiya Janata Party (BJP), prime ground for implementing new educational measures.

“The northeastern states have 180 regional languages and we want Assam to become a laboratory for a caste, tribe, language-based education system,” the minister was quoted as saying. “The government of India will prioritise every resource needed for this.”

Speaking of the North-East Education Conclave 2021, Pradhan said it is being held under the leadership of the Himanta Biswa Sarma-led Assam government and that multiple officials of the central and state governments alike are to conduct the two-day deliberation.

The minister further added a word for Prime Minister Narendra Modi, highlighting the national education policy (NEP) implemented by the central government. “Prime Minister Modi has made the NEP a big instrument in the 21st-century transformative society,” Pradhan said, moments after inaugurating the programme in the presence of Assam chief minister Himanta Biswa Sarma, the state’s education minister Ranoj Pegu, multiple ministers of the northeastern states, and other senior officials of the Assam education department.

The Union minister said students are the greatest stakeholders in the national education policy, which was passed last year. “The NEP is focused on developing the desired learning competencies right from pre-primary, equipping students with 21st-century knowledge and skills, and preparing our youth to become global citizens.”

Talking of Assam as a case in point, the Union education minister said that this might be the only state in India to spend as much as six per cent of its gross domestic product (GDP) on education. Moreover, considering the fact that bio-mass-based renewable energy has recently been of value in the northeastern region, the minister said that knowledge of such alternative sources of energy will be an integral part of the students’ educational curriculum to expectedly pave the way for broader economic transformation.

Assam chief minister Sarma thanked the Union education minister and Prime Minister Modi for their efforts to finalise a roadmap for the implementation of the NEP in the region. The chief minister said that the central policy will provide students with an opportunity to strive for “knowledge beyond their mark sheet”.

The two-conclave in Guwahati has been organised by the education department of Assam and the Sankardav Education & Research Foundation to discuss the implementation of the NEP. Multiple officials of the education department, other state and central government officials, and multiple academicians were present at the inauguration ceremony, informed the Assam chief minister’s office.