Pratap Bhanu Mehta writes: It is treated as language of past not future, of popular culture but not high knowledge 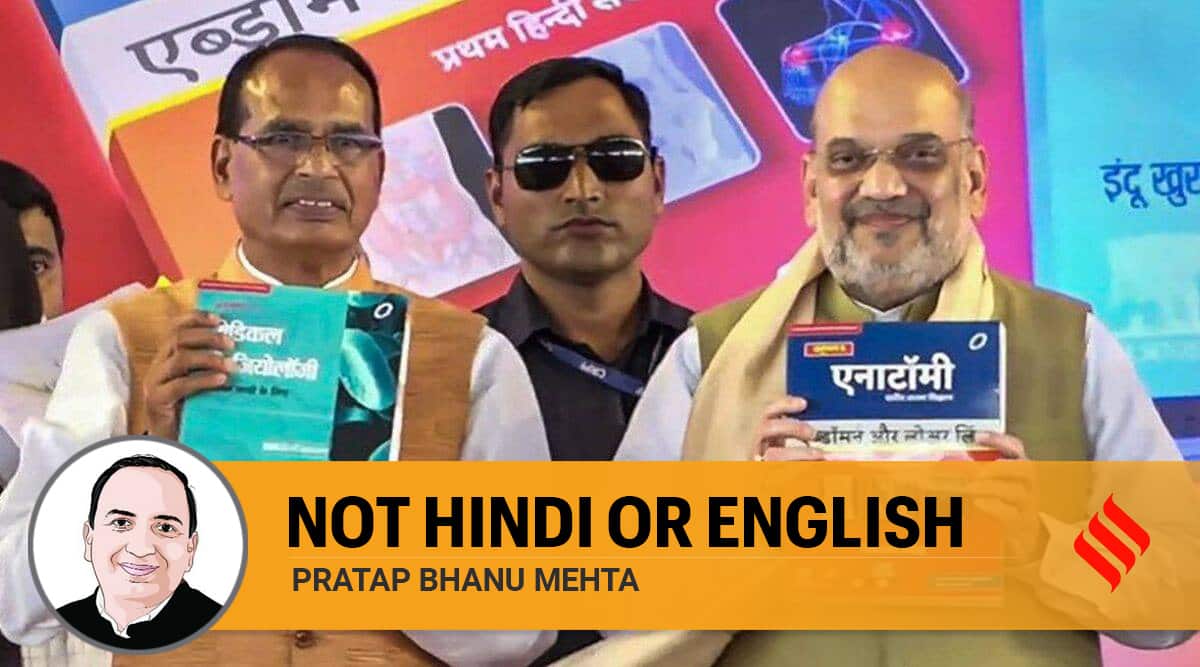 India’s linguistic diversity poses two different challenges. The first is the imposition of Hindi as the primary language across the country. This aspiration is resisted by different states. India has historically done well, and did not meet the fate of Sri Lanka, by creating linguistic states, by working out a three-language formula, and by a political culture that, with the exception of old Lohiaites and the BJP, has not pressed hard on the question of a single language. Prime Minister Narendra Modi’s remarks on English in a recent campaign rally, the controversy over medical education in Hindi and the parliamentary report on promoting Hindi, will give new life to this politics.

But there is another subtler issue that gets overshadowed by the question of “Hindi imposition” — the status of vernacular languages. The anomaly of the Indian language experiment is not the political accommodation given to so many languages. It is that the accommodation comes with a hierarchy. English has been the language of power, at the frontiers of knowledge and access to privilege. The vernacular had become increasingly confined to identity, culture, and a marker of second-class status. The challenge of Hindi, for example, is not that it might be imposed on the South. That is easy to deal with.

Also in Express Opinion |P Chidambaram writes: Will Hindi and Hindu own India?

The challenge of Hindi is that inhabiting the world of Hindi is seen as closing off access to the frontiers of knowledge, not just in science but in civic knowledge, like higher echelons of law. It is also treated as a marker of parochialism and inferior status. The problem may be less acute with other languages like Tamil, Kannada or Bengali, but it exists. The anomaly of the India experiment is not diversity: It is the claim that the language of self, identity and culture be different from the language of knowledge, privilege and access. This is the experiment India is conducting on a large scale. Is it a sustainable one? Arguably, behind the success of the BJP in North India is not the desire to impose Hindi. It is the untapped resentment of a Hindi culture that often is made conscious of its own second-class status in global hierarchies. Millions of vernacular speakers feel disenfranchised in the worlds of knowledge and prestige.

State failure compounds this problem. India’s two-language formula produces a superficial bilingualism. We may speak two or three languages. But most of us cannot operate at the frontiers of knowledge in two languages. And the teaching of the third language is totally wasted. There is so much hand-wringing about the Nehruvian state sidelining Indian culture. But the real issue was not that Sanskrit was sidelined. It was that it is taught in a way that even after years in our school system, those who had passed the exam had no competence in it.

Our translation missions are so meagre that except for literature, they do not grow the language by translating knowledge into it. So the division of the function of languages has also become a division of persons, between those whose fluency in English is greater than their fluency in a vernacular, and those who might know English but struggle with it. There was also a generation that was taught in a vernacular language very well. They found it easy to switch to English later. Now the education system does not prepare you for either trajectory, not at least on a mass scale, leaving the Hindi speaker relatively stranded.

It is not an accident that parents are demanding English education. Many Dalits have valorised English as a sign of emancipation. Many states that had decided to postpone the teaching of English till later classes had to reverse course. The demand for English has exploded and no one opposes it. But here again, there is a state failure where access to English is uneven, and does not ensure a level playing field.

But the “teach everyone English” movement has not solved the problem of the linguistically stranded. These are groups who are fluent in the vernacular but find their prospects limited by not knowing English; or there are groups whose access to English is not of enough quality to give them a competitive advantage. And then there is the subtle way in which our identity gets stranded. English is now an Indian language. To exorcise it by tagging it as foreign would be a gross mistake. But it cannot be the case that the need for English relegates the vernacular. The vernacular is treated as the language of the past not the future (and custodians of these languages confirm this by obsessing over the history of the language, not its future). They are the languages of popular culture but not high knowledge, the languages of self and emotion, not participants in a universal rationality.

So the language question does not go away, even if you agree on two propositions. First, that Hindi should not be imposed, and second, that English should not be treated as a foreign language or a marker of colonialism. What is the status of the vernacular? Does the drive for English permanently relegate it to second-class status? In non-Hindi speaking states, this problem was sublimated in part by giving the language a political identity in opposition to Hindi. But can these languages be inhabited fully, without disadvantage, in the universe of knowledge, remains an open question.

The discussion of the language issue ought to be pedagogical rather than political. It will be, for instance, important for doctors to have English to easily access a continually evolving world of research; just translating a few textbooks into vernaculars will not solve the challenge. But it is equally true that the ability to communicate fluently in vernacular languages will be a great asset. And it is also possibly true that for those who did not get an English education, continuing vernacular education should be a medium of expanding their opportunities. The problem is that our education system will not do the homework to make any language strategy work fully. The scepticism of teaching medicine or engineering in the vernaculars (and not just Hindi) is that our knowledge eco system is not prepared for it; the scepticism of English is that it has left so many people behind.

The genius of India is that it has, historically, not locked itself into binaries over language choice. With creative pedagogies, we can reclaim that heritage. But raising the political pitch on language serves neither the cause of knowledge or national unity.