After compelling the insurers to cover the treatment of Covid, insurance regulator IRDAI has now pushed them to cover treatment of a number of modern treatments. Health insurance companies in India are quite orthodox and were reluctant to cover any disease beyond the traditional list of illnesses without any intervention from the IRDAI.

Health insurance companies in India are quite orthodox and were reluctant to cover any disease beyond the traditional list of illnesses without any intervention from the Insurance Regulatory and Development Authority of India (IRDAI).

“In June 2020, the Insurance Regulatory and Development Authority of India (IRDAI) issued new guidelines for health insurance policies. These new guidelines required insurers to standardise important policy clauses (specifically exclusions) and ensure that customers could understand them easily. Some guidelines instructed insurers to deduct claims in more customer-friendly ways. And, for the first time, there were guidelines that instructed insurers to cover a few modern treatments that were usually exclusions up till then,” said Avinash Ramachandran, COO, Assurekit.

Some of the health conditions covered by standard health insurance plans in India now include:

The following diseases are covered under mental health insurance as a mental illness:

Mental illness was supposed to be covered under the mental healthcare act passed in 2017, but it was only around 2020 that insurers filed products that covered treatments for mental illness. However, health insurance is actually hospitalisation insurance, and therefore claims are only paid out if you are hospitalised, and not for doctor consultations, etc.

Health insurance plans typically did not cover the cost of refractive or laser eye surgery (LASIK). Because LASIK is used to treat myopia, astigmatism, hyperopia, it was considered a cosmetic procedure, and therefore not covered.

However, some companies were paying if certain criteria were met. The IRDAI formalised this, and instructed insurers that LASIK must be covered in health insurance policies provided the refractive error(lens power, in layman’s terms) is more than 7.5. Since then all health plans cover it, except for a few old legacy health insurance products.

Functional Endoscopic Sinus Surgery, or FESS, is used to treat sinusitis. Generally, most insurers cover this as a daycare procedure(where you are in and out of the hospital the same day), provided an ENT has deemed it medically necessary. ENTs sign off on surgery when they have tried other, non-invasive treatments and the problem still persists. Insurers will also ask for scans showing sinusitis dated before the surgery signoff, to ensure that it is a medically necessary procedure.

FESS also requires post-care procedures, where the ENT ensures the passages heal correctly. Insurers cover the surgery costs, but the post-care sessions are sometimes sublimited or excluded, based on your plan. There are policies that cover up to 3 post-operative sessions.

However, some group health policies(health insurance taken by a pre-existing group, such as employees of a firm) cover surgery, with some sublimits. The sublimit is usually around 50 per cent of the cost of surgery, but this can vary. The cost of the implant itself is also excluded in most cases.

The additional covers, however, would be optional and would result in additional premium – which may vary from insurer to insurer – if opted for.

“Modern treatments that are now included in the insurance cover – there are standards covers and customised covers available under the GMC policy, below is the list of Standard Covers, in case corporates want higher cover/ customised to their GMC policy, it can be availed by discussing with the insurer at the time of policy renewal,” Komal Chhabra, AVP – Customer Success, Pazcare.

However, there would be limits on the maximum amount per treatment / procedure per policy period as given in the following table: 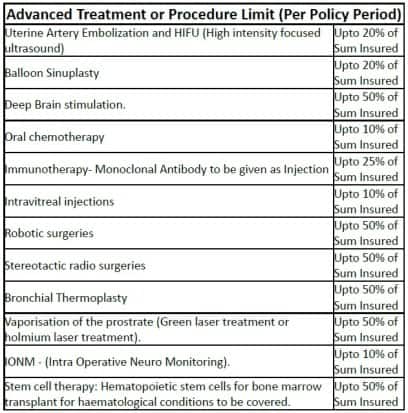 List of modern treatments that are now covered by health insurers.

Chhabra provides the terms and conditions that may be imposed on the treatments proposed to be covered by the health insurance companies.

Psychiatric ailments: While this has been part of global health insurance, but in India, the cover has come through its existence in the Pandemic period. Prior to Covid, the awareness of Psychiatric cover was not much talked from either sides, but with Covid -19 affecting the lifestyle across, even when corporates emphasised on the cover under the policy, the insurers across PSU and Private segment honoured it. There are 2 categories to it, IPD and OPD, hence it is important to have both types included under the policy as major treatment takes place under the OPD category.

Premium: loading is expected and could vary insurer to insurer.

Functional endoscopic sinus surgery: Various insurers cover it. But may have sublimit as per insurer product.