Amandeep Kapoor writes: It is time for a collective fight against the tyranny of malicious prosecution and tutored reporting. Preventive and substantive fear from these measures, taken effectively and repeatedly, will be the broad shoulders of solace for both the fraternities 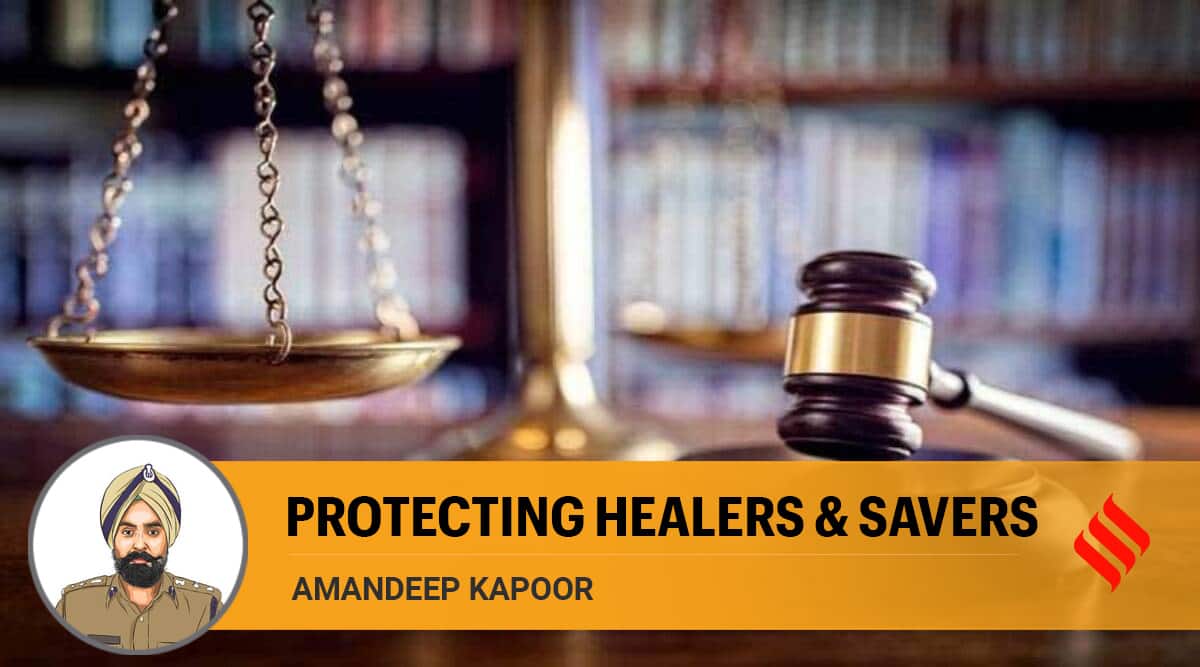 The sections dealing with acts of omission and commission to institute false charges include IPC sections 182 and 211 and section 166-A. The Law Commission also looks at their role as possible remedies.

I am a doctor and a cop. Both professions are healers and savers. They face thanklessness regularly with aplomb and move on. And both, I realise, need more shoulders to carry their burden.

Doctors are increasingly facing violence and “malicious prosecution”. Interestingly, in a reply to an RTI query on July 5 by a Kannur-based doctor, the Health and Family Welfare Ministry admitted that it has withdrawn the draft legislation on Healthcare Service Personnel and Clinical Establishments (Prohibition of Violence & Damage to Property) Bill, 2019, which would have made such violence a non-bailable and cognisable offence with a jail term of up to five years.

According to reports, the bill made the Home Ministry uncomfortable, presumably because they feared other professional groups, like lawyers and police, would demand similar laws. There is merit in this. Instead of demanding untenable pieces of legislation, the pressure groups of medical bodies should focus on the effective use of already available legal shields like the IPC and CrPC, and focus afresh on the scourge of malicious prosecution.

Let’s elaborate on the assault on reputation by malicious prosecution first. What legal remedy does a doctor or common person have when the law is set in motion frivolously and maliciously against them? The Law Commission of India, in its 2018 report on “Wrongful Prosecution (Miscarriage of Justice): Legal Remedies” suggests a draft law, mostly compensatory, which talks about criminal remedies, but barely touches on preventive aspects.

In March, a woman doctor in Dausa district of Rajasthan committed suicide when an FIR was registered against her for alleged misconduct and negligence. The senior cops were transferred, and the SHO was suspended. Both these events were avoidable.

Since in our system, investigation is the exclusive domain of the police, there are certain immunities provided to them while investigating. Immunity from tortuous liability while performing their sovereign function is the main one. The functions of maintaining law and order (and arrest and detention) have been classified as “sovereign” functions. The Supreme Court, applying the principle of sovereign immunity, held that the courts could only quash an arrest or detention if it was not according to law.

It is time for a collective fight against the tyranny of malicious prosecution and tutored reporting. The sections dealing with acts of omission and commission to institute false charges include IPC Sections 182 and 211 (for both public servant and private complainant) and section 166-A (for public servants). The Law Commission also looks at their role as possible remedies. The field practitioners will vouch that if used aggressively, Section 211 can be an effective tool to penalise false charges to injure a person (including their reputation). The section is stringent with imprisonment up to seven years.

Unfortunately, the courts have not taken cognisance of the police filing court complaints, fearing an increase in their workload. In a data analysis of Rajasthan, from January 2019 to April 2022, the total negative final reports were 2,93,956, out of which 1,14,973 were certified false. Out of these, 5,815 were forwarded by the station house in-charges to courts for taking cognisance for malicious prosecution. Only 916 were convicted — a meagre 0.79 per cent of the total.

Disciplinary action should also be taken by professional bodies like the bar associations and prosecution bodies, in case of tutoring and abetment of false charges. This is a rampant practice, but there is light at the end of the tunnel. Trial courts in Jhunjhunu, Rajasthan have convicted 52 for malicious prosecution in a special drive recently.

On the effective use of already available legal shields, medical bodies can create a corpus to fund legal representation in every case of vandalism, violence and disruption of healthcare functions and premises to ensure quick and certain convictions.

Preventive and substantive fear from these measures, taken effectively and repeatedly, will be the broad shoulders of solace for both my fraternities.