In this edition of ExplainSpeaking, we look at forex reserves and exchange rates, how they impact each other, and why it’s necessary to keep aside political loyalties in understanding them. 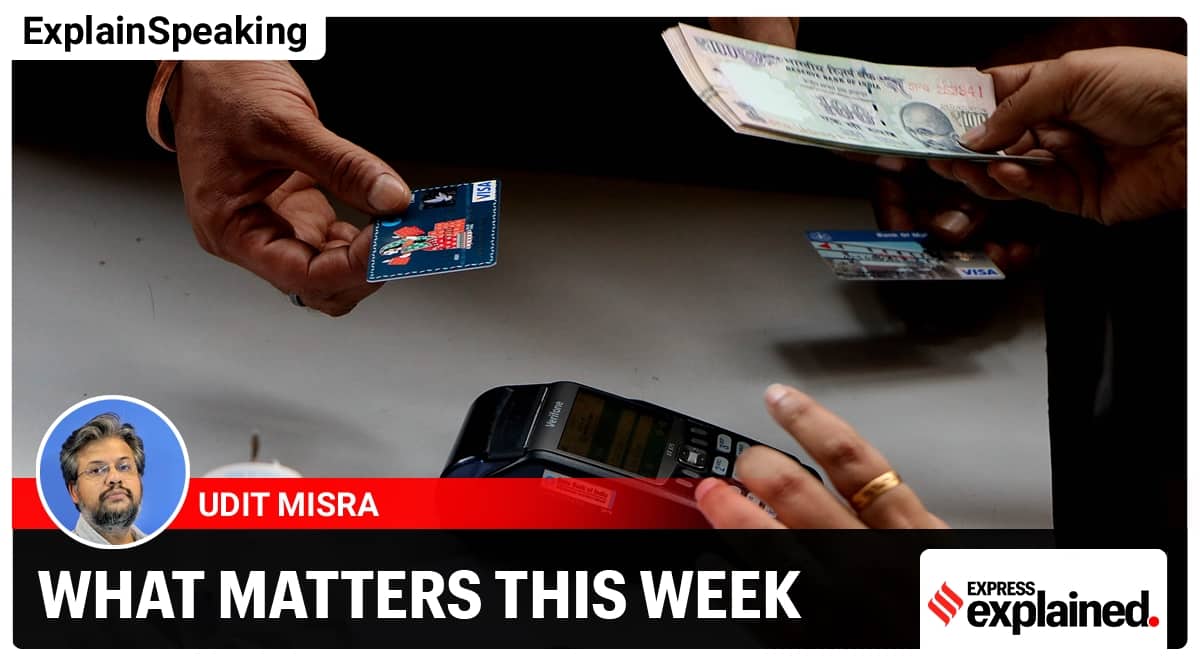 Broadly speaking, for a developing economy such as India, a gradually weakening rupee is economically beneficial and, thus, desirable. (Express Photo/Kamleshwar Singh)

ExplainSpeaking-Economy is a weekly newsletter by Udit Misra, delivered in your inbox every Monday morning. Click here to subscribe

Over the past two years, and more so over the past two months, you would have read or heard repeated mentions of India’s forex (short for foreign exchange) reserves and the rupee’s exchange rate.

In the immediate past, you would have read that both India’s forex reserves as well rupee’s exchange rate (vis a vis the US dollar) have been falling quite sharply.

Before understanding what these things mean and how they are related, one must keep aside political loyalties.

Many detractors of the incumbent government have used the fall in the rupee’s exchange rate as well as the fall in forex reserves to criticise Prime Minister Modi’s economic management. Are they justified?

If they are, would the same people accept that Mr Modi and his supporters were justified when they employed the same logic in criticising the UPA government in 2013?

Similarly, for the better part of the past two years when India’s economy was getting battered by the Covid pandemic, supporters of the Modi government had a familiar retort: If the economy is so bad, why are India’s forex reserves so high?

[There was another retort — If the economy is so bad, why is the Sensex rising so fast? — but that is a story for another day]

Now that the forex reserves are falling quite sharply, would the same supporters of the government say the economy is getting worse (even though it actually isn’t)?

The point is: The level of forex reserves and the rupee’s exchange rate are policy choices and they are not driven by the ideological stance of any particular political party.

Nor should they, as you would understand by the end of the piece.

What is the rupee’s exchange rate?

If India was the only country in the world or if India did not trade with any other country in the world, neither of these concepts would have any meaning. In other words, both are directly related to India (that is, Indian individuals and firms) trading with other countries in the world. “Trading” involves all kinds of transactions such as Indians importing US goods (say laptops), Indians exporting goods (say mangoes) to the US, a US company engaging the services of an Indian software firm, India allowing a US bank to open its branch in India, rich Indians buying property in the US, and rich Americans investing in Indian stock markets so on and so forth.

Now, imagine that at the beginning, for every rupee demanded in the market, there is a demand for a US dollar. The exchange rate between the two currencies would be 1.

But if over time more dollars are demanded than the rupee (because, say, Indians import more from the US than what the Americans import from India, then the dollar would appreciate against the rupee. The dollar’s exchange rate with the rupee would change from 1 to (say) 10.

If this trend continues, the rupee will keep becoming weaker and weaker and its exchange rate will keep falling (say, to Rs 50 to a dollar).

Now as this is happening, those Indians who import stuff from the US will be getting annoyed because, with each passing year, the rupee buys less and less of an American product (which is priced in US dollars).

But those Indians who export stuff (say, mangoes) to the US would enjoy this “depreciation” in the rupee’s value. Why? Because the rupee’s depreciation makes India’s mangoes cheaper and more affordable to US customers. This often leads to the Americans buying more mangoes from India as against some other competing country (say Pakistan).

Where and how do the forex reserves come into this picture?

In a free market set-up, the rupee’s exchange rate will fluctuate depending on the relative demand for the rupee among Americans (or foreigners in general) and the demand for dollars among Indians.

In case such relative demand fluctuates wildly, then, predictably, the rupee’s exchange rate too will fluctuate wildly.

Sharp and repeated fluctuations will, however, destroy firms.

Imagine being an Indian importer who placed an order to buy something worth $100 only to realise that by the time of payment, the exchange rate has doubled. At the level of companies, even small variations can sink an enterprise. Even at an individual level, say students preparing to study in the US, this can have a big impact. A sharp depreciation of the rupee can make their study plans unviable or at least exorbitant.

Similarly, imagine someone residing and working in the US sent $1 lakh back to your family in India, hoping the exchange rate would give their family 70-times the amount (Rs 70 lakh), only to realise that the exchange rate had fluctuated and made the rupee so strong against the dollar that their family will now get just Rs 60 lakh.

This is where the RBI and forex reserves come into the picture.

For an emerging economy such as India, which is trying to build its economy by increasingly creating a niche for itself in the global market, the exchange rate mustn’t appreciate to such an extent that it hurts India’s exporters.

Now suppose in a particular year, foreigners demanded rupees more than Indians demanded dollars. That is, there was a relative excess of dollars in comparison to the rupees in the forex market. Without the RBI, the rupee would have appreciated/become stronger. But that would have hurt the interests of India’s exporters.

What happens to the dollars the RBI buys? They become India’s forex reserve.

Similarly, those who criticise the RBI and the government for inept management of the economy based solely on the argument that the rupee’s exchange rate versus the dollar is falling, fail to understand how a so-called weaker rupee benefits India’s exporters and how a stronger rupee will hurt India’s attempt to become a global exporting hub.

It is instructive here to know about the country which has the highest forex reserves in the world: China.

What has China been doing?

Take a look at the TABLE below (Source: World Bank). It gives the “Total reserves minus gold (in current US$ terms)” for a selection of countries comparable to India. Note China’s forex reserves and how much more they are than most of the developed economies.The table shows the total reserves (minus gold) for various countries, including the US and China, as compared to India. (Source: World Bank)

What does this show? China has been soaking up foreign currencies from the forex market and thus either allowing its currency to stay weak (or become weaker) or at the very least, avoid it from becoming too strong.

Why does China do that? Because it wants its exports to be attractive in the global market.

Has this strategy succeeded? Yes. Has this come at a cost? Yes. Recall all the stories you read last year about the US, in particular, accusing China of currency manipulation.

The point is not to argue that India should manipulate its currency. The point is to understand how the level of forex reserves and the rupee’s exchange rate are related.

What’s the point of having forex if it is holding back the rupee from appreciating?

Many had thought that when Mr Modi comes to power, the rupee’s exchange rate will improve and become 40 to a dollar. At least some of them might argue that if high forex reserves are holding back the rupee from achieving that height then what’s the point of having forex?

As explained, one key reason why RBI intervenes in the forex market is to smoothen the volatility of the exchange rate. Wild fluctuations — on either side — are ruinous and erode credibility in a country’s currency.

But the other big reason is strategic.

Imagine a scenario when India is at war and it could not export all that it typically did for 4 months. In other words, all the dollars that would have otherwise come into India as repayment for those exports would never come.

In Opinion |Inflation Targeting: Why the criticisms of the RBI governor are misplaced

However, just because India could not export may not mean that India’s import needs had also disappeared. It is quite possible that India’s oil imports or the imports of other goods such as steel or fertilisers might have increased. Where would the dollars to purchase those imports come from?

That is where forex reserves come to the rescue. That is why when talking about forex reserves, we often hear about the number of months for which they will cover the country’s import (called the “import cover”).

Upshot: Instead of viewing forex and rupee’s exchange rate movements either from a warped jingoistic lens or through the cracked mirror of allegiance to different political parties, one should understand two things: One, broadly speaking, for a developing economy such as India, a gradually weakening rupee is economically beneficial and, thus, desirable. Two, the point of forex reserves is two-fold: to smoothen fluctuations in the exchange rate and to provide some strategic import cover. Merely accumulating forex reserves is not an end in itself; it is neither the ultimate measure of an economy’s success nor something that comes without a cost.

For a more real-life data-based explanation, read this ExplainSpeaking edition.

Stay safe and share your views at udit.misra@expressindia.com.
Udit