Ashima Goyal writes: India has achieved higher growth and lower inflation than most countries in these difficult times. It is dangerous to apply textbook economic theory based on perfect markets without taking contexts into consideration 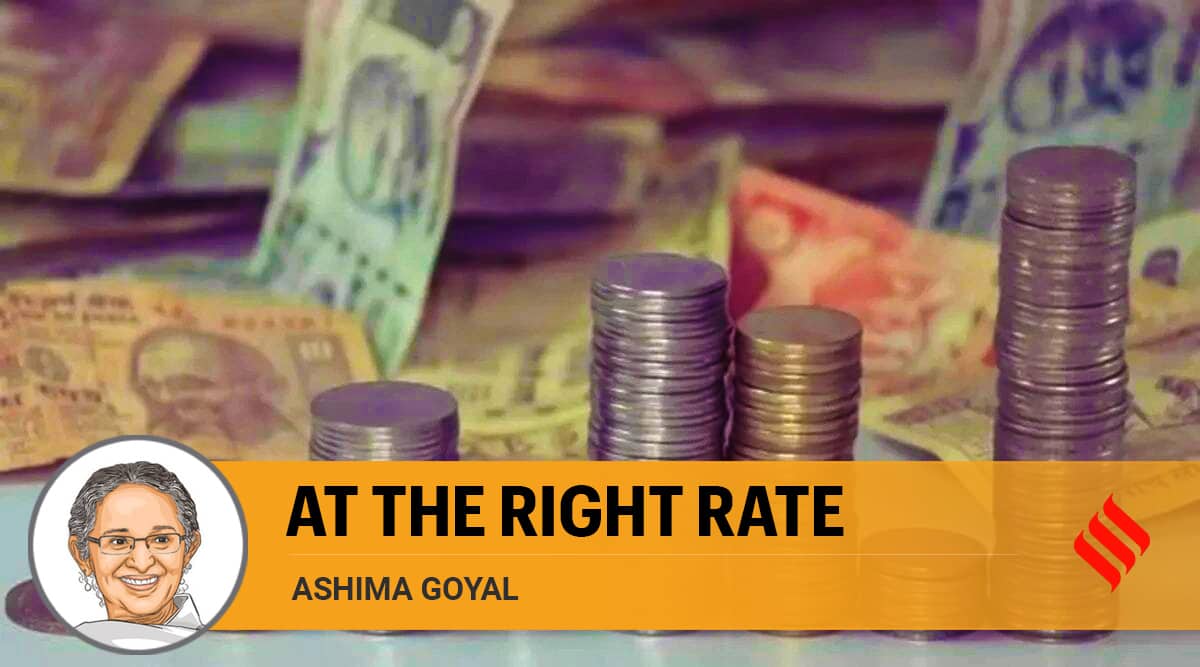 Inflation targeting is an art that requires skill, attention to context and an open mind. (Representational/File)

All emerging markets (EMs), including India, are facing outflows of foreign portfolio investment as the US Fed tightens. These surges and sudden stops, due to changes in global risk, were a major reason EMs had lower growth in the 2010s compared to the previous decade. Excess volatility in financial variables hurts the real sector. The lesson for EM policy is to smoothen volatility as much as possible.

Canonical inflation targeting wants exchange rates to float as the correct response to capital flows. Policy should respond to exchange rate fluctuations only after they affect inflation or output. Any interest rate defence of the exchange rate would reduce the focus on inflation. But policymakers disagree as most EMs intervene in foreign exchange (FX) markets in order to reduce volatility. As Edward F Buffie and co-authors point out in a 2018 paper, this is a serious problem for a theory whose position seems to be: So what if floating doesn’t work in practice, it works in theory. Their research finds FX intervention greatly enhances the efficacy of inflation targeting. Two instruments for two targets work better than trying to do everything through the interest rate. Excess depreciation in thin markets can raise inflation. Markets can get trapped in cumulative one-way movements and panics.

Amarjeet Sinha writes: |Welfare of the urban poor cannot be an afterthought in economic growth plans

Much other research, including from the IMF, argues for the use of prudential capital flow management techniques and finds reserve accumulation and its use reduces risks and crises in EMs.

India has all these types of policies. Its sequenced approach to capital account convertibility, where, for example, debt inflows are only allowed as a percentage of domestic markets, saved it from the kind of interest rate volatility Indonesia experienced during the taper tantrum and is helping it now. More liberalisation measures can be taken when needed. The temporary relaxations announced on July 6 are an example. India’s large FX reserves have allowed rupee depreciation to be lower than most other countries as the dollar strengthens.

Yet inflation targeting purists attack the Reserve Bank for its intervention, never mind that India has achieved higher growth and lower inflation than most countries in these very difficult times. Never mind that it is dangerous to apply textbook economic theory based on perfect markets regardless of the time and the place. Such market purists, and those who would gain from the additional business created, have long been pushing India towards full capital account convertibility. It would have been in deep trouble if it followed that advice. Capital flows are welcome but along with domestic market deepening so diversity increases but volatility is contained.

There are costs of holding large reserves and of too much intervention. The central bank ends up supporting the US and not its own government borrowing and it sacrifices interest income. But holding reserves and then not using them when required is the most costly. Again use of multiple instruments can mitigate over-reliance on intervention.

Much research and recent experience suggest that all available instruments should be used to moderate volatility in nominal variables. This would prevent excess deviations of real variables, such as real interest and exchange rates, from equilibrium levels. These affect, and deviations can distort, real sector decisions. In the previous decade when Indian growth and investment rates fell, real interest rates ranged from 10 to 6 per cent. While depreciation does benefit some exporters, all are hurt by excess volatility of exchange rates.

Simplistic solutions suggested are all wanting from this perspective. A common suggestion is to raise policy rates to maintain a historical gap with US Fed rates. But such an interest rate defence did not prevent outflows during the taper tantrum or in 2018 and only triggered a slowdown. It forgets that interest-sensitive flows are only about 8 per cent of India’s foreign liabilities. Some of this is quite sticky. There have been no debt outflows in 2022 despite a narrowing interest differential. Equity outflows also seem to be tapering. Monetary tightening that dampens expectations of growth, induces more outflows as country risk-premiums rise. Some commentators assume Indian inflation must rise with the US and therefore, want rates to rise. They forget that India did not have an excess fiscal stimulus and its labour market is not tight. Its policy rates must respond to its own inflation.

Another group wants less intervention and more rupee depreciation in order to improve the current account deficit. But less intervention can lead to a chaotic fall and jittery markets as we saw in 2011. As inflation rises with nominal depreciation, real appreciation will result, defeating the policy. It is real appreciation that affects trade. It is best for policy to prevent over-depreciation due to global risks. After about 4 per cent nominal depreciation, India’s real effective exchange rate against a basket of 40 countries is approaching 100. That implies the real exchange rate is too depreciated since India has had relatively more structural reform and productivity growth. Future corrections toward equilibrium will require a rise of the rupee. High oil prices are a risk for India’s balance of payments, but multiple types of adjustments have the best chance of succeeding.

Market participants want clear communication and no surprises for markets. Forward guidance is an important part of inflation targeting. But when markets tend to overreact and are influenced more by the US than by Indian policy, the best way to introduce a policy change may be by surprise. Thus markets had priced in excessive rate hikes after the US Fed began tightening. The steep surprise hike in Indian repo rates prevented additional rate hikes from being priced in as domestic rate-rising began. Yields have actually softened now. The overnight index swap rate, which is influenced too much by overseas non-deliverable forward markets, expected the repo rate to rise to 7.34 per cent and has since fallen to a still excessive 6.77 per cent. To predict correctly, markets must pay more attention to Indian conditions and internalise the inflation target. Both inflation targeting and markets have to mature further together.

Inflation targeting is an art that requires skill, attention to context and an open mind.