Ambuja Cement ended Friday with a market capitalisation of Rs 73,836 crore while ACC closed the day with Rs 43,819 crore.

The much-talked-about sale of Ambuja Cement and ACC by Holcim Group will see the single-biggest outflow of foreign capital from the country if the two cement firms are acquired by Indian investors. The deal, valued at nearly $10.35 billion, will put in the shade Cairn Energy Plc’s exit from India in 2010, when it sold Cairn India to Vedanta Group for $4.48 billion.

According to various reports, big business groups such as AV Birla, JSW Group, and Adani Group are in the fray to acquire Holcim’s assets in India.

Switzerland-based Holcim Group is expected to get nearly Rs 79,200 crore, or $10.35 billion, for its majority stake in Ambuja Cement and ACC, which together are the country’s biggest cement maker after Ultratech Cement.

Holcim Group’s stake in Ambuja Cement and ACC, based on the two companies’ share prices on Friday, is valued at Rs 48,620 crore.

The acquirer will have to come up with an open offer to buy 26 per cent in these two companies from non-promoter shareholders. 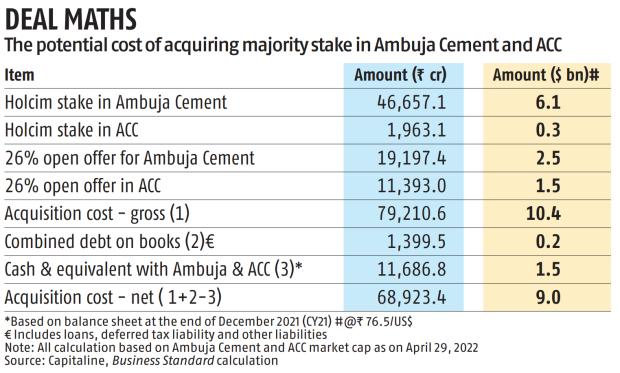 Ambuja Cement ended Friday with a market capitalisation of Rs 73,836 crore while ACC closed the day with Rs 43,819 crore.

The deal value will rise if there is a rally in these stocks.

Analysts say the deal will be a reversal of the inflow of foreign direct investment (FDI) into India if these two Holcim Group companies are acquired by Indian business groups or investors.

“$10 billion is a large amount and if the deal goes through it will have an impact on India’s external sector such as the rupee exchange rate and overall capital inflow into the country,” said an analyst.

The amount will be equivalent to nearly half the cumulative sell-offs by FPIs in the secondary equity market in the past seven months.

According to the data from the Securities and Exchange Board of India (Sebi), FPIs have cumulatively sold shares worth $21 billion on a net basis since the beginning of October 2021.

The amount will represent a significant part of the annual FDI inflows into the country. According to the Union government, India received FDI worth $54.1 billion during the first eight months of FY22. India depends on capital inflow such as FDI, FPI in the equity markets, and remittances by Indians working in Arab countries to fund the current account deficit.

India’s imports of goods and services exceed its imports, resulting in a current account deficit.

For example, in February 2018, foreign investors including SoftBank, Microsoft and Nasper sold their stake in Flipkart Online Services to Walmart Inc for $16 billion.

Holcim Group has made no official comment on the potential deal but had announced a portfolio transformation strategy in 2021 to divest strategically and use the proceeds to make acquisitions in mature markets.

As part of the plan, it sold its assets in Malawi, Zambia, and Madagascar, and has signed a deal to exit the Brazilian market.