Pull out capital for 7th straight month in April

Foreign portfolio investors (FPIs) have been net sellers of domestic equities for the seventh straight month in April — their longest monthly selling streak since the global financial crisis (GFC) in 2008.

A combination of headwinds such as hawkishness by global central banks, the raging war in Ukraine, a spike in commodity prices, and stretched valuations have led to continuous pullout by overseas funds from the domestic market. Since October 2021, FPIs have sold Indian stocks worth a record $22 billion (about Rs 1.7 trillion). In 2008, FPIs were net sellers for seven straight months between May and November. Back then, they had yanked out nearly $10 billion from domestic stocks in the aftermath of the GFC. The selloff had led to a 50 per cent crash in the benchmark Sensex.

Despite a record selloff this time around, the Sensex is down only 7.4 per cent from its peak hit in mid-October. Unlike in 2008, sharp inflows from individual investors and domestic institutions have been able to absorb the heavy selling by FPIs, cushioning the market fall.

A surge in US Treasury yields has led to capital outflows from across emerging markets, and not just India. However, given India’s sharp outperformance since March 2020 led to a widening of valuation premiums vis-à-vis other EMs, outflows have been sharper from the domestic market. 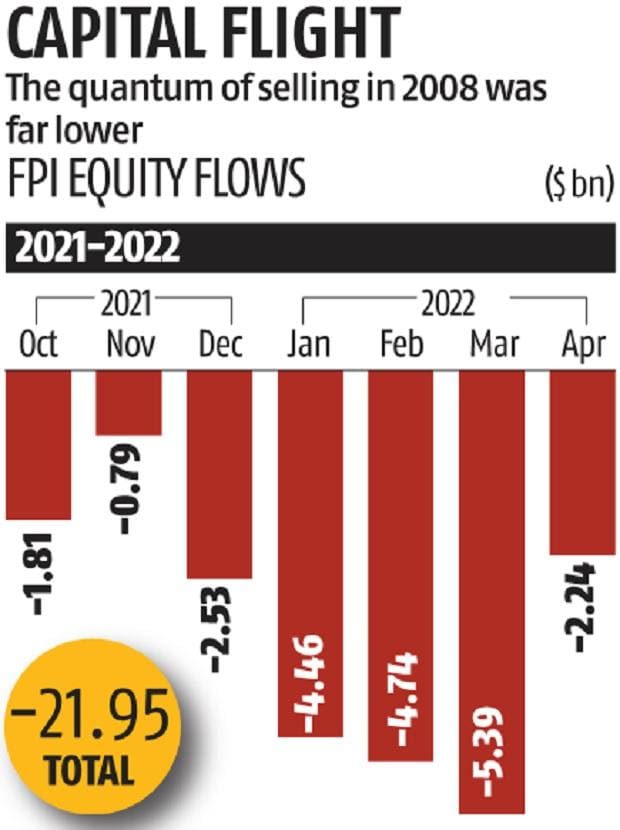 “Valuations haven’t changed much and will remain elevated because you no longer see a surge in earnings upgrades like we saw a year ago. If anything, downgrades are happening, so valuations remain a concern,” said Andrew Holland, CEO, Avendus Capital Alternate Strategies.

Apart from stretched valuations, the hawkish stance by central banks, which prioritised fighting inflation after terming it transitory, has also weighed on Indian equities.

“Whenever interest rates rise globally, taking money off riskier assets across emerging markets is usual. These include emerging market currencies and bonds as well,” said Holland.

Geopolitical tensions in Europe and rising Covid cases in China have spurred a flight to safety, with havens such as the US dollar and Treasury hitting multi-year highs.

“At present, China’s Covid situation is very bad. India’s Covid situation started to worsen in 2020, a couple of months after the situation got worse in China. There is a time lag between what happens in China and Europe and India,” said U R Bhat, founder, Alphaniti Fintech.

A fall in the rupee eats into the returns for overseas investors.

“With dollar strength and accelerated interest rate hikes, FPIs will be more comfortable investing in the US or dollar-designated markets instead of emerging markets,” said Bhat.

Some analysts believe that FPI flows into India will reverse once the global situation stabilises. India, they say, will stand out because it will still be one of the fastest-growing economies despite inflationary pressures. India’s sectoral diversity will also help its case, experts said.

“Once there is more clarity on what the Fed is thinking after its first raise and findings, then people will look for more stability. That’s when I expect more flows to come back to India. It could probably happen during the second half of the year,” said Holland.

Following the GFC in 2008, central banks took time to announce the monetary stimulus. This time around, central banks and the government were quick to unleash stimulus measures. However, with inflation hitting multi-decade highs in the US, the Federal Reserve has been forced to unwind the stimulus measures that helped propelled global equities.

Experts said the boom and the bust cycle this time around were shorter compared to 2008.