The Centre has initiated its two-day deliberations with state-owned lenders, the first day meeting being PSB Manthan 2022 to discuss implementation of next-generation reforms and explore strategies for long-term profitability.

It will hold a review meeting of banks on Saturday to assess their performance on financial inclusion.

The PSB Manthan, which resumed after 2019, focused on ways to further strengthen public sector banks.

It also aims to make the banks self-sufficient to raise capital from the markets, and not entirely rely on the Centre for fund infusion.

One of the themes of the meet was to explore collaborations among PSBs, and large lenders were told to share best practices with smaller banks where more expertise is needed.

The meeting was chaired by financial services secretary Sanjay Malhotra, who advised banks to explore strategies for long-term profitability and adopt a more customer-centric approach, an official said.

The deliberations with bankers also involved implementing digitally-enabled customer-centric products, using big data and analytics. This is for advancing credit, and improving governance as well as focusing on employee development. 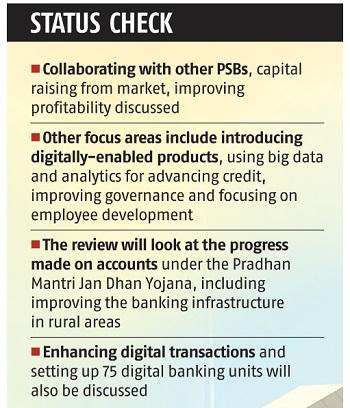 On Saturday, the finance ministry will also review the progress made by PSBs on various financial inclusion schemes and establishment of digital banking units.

The review will look at the progress made on accounts under the Pradhan Mantri Jan Dhan Yojana, including improving the banking infrastructure in rural areas.

Banks’ inputs on how to improve the schemes would also be noted and adopted wherever feasible, the official added.

Giving a leg up to digital transactions would also be discussed along with preparatory work for establishment of digital banking units as announced in the Budget.

The Budget had proposed setting up 75 digital banking units in 75 districts across the country by scheduled commercial banks.

Besides, formalisation of micro food enterprises, and review of other agriculture-specific initiatives of the government would also be undertaken.