A merger, which was in the making for years, has finally fructified in a $40-billion deal to create a banking behemoth. The country’s largest housing finance company and the biggest private sector bank announced on Monday that their boards have approved an all-stock amalgamation of HDFC Ltd into HDFC Bank, subject to regulatory approvals. At present, HDFC is the parent company of the bank. The merger will be a two-step process wherein, HDFC Investments Ltd and HDFC Holdings Ltd, which are wholly-owned subsidiaries of HDFC, will be merged with and into HDFC. Then HDFC will be merged with HDFC Bank. HDFC and its two subsidiaries currently hold 21 per cent of the share capital of HDFC Bank. HDFC shares will be extinguished after the merger. The entire process, including getting approvals from shareholders of HDFC and HDFC Bank, Reserve Bank of India (RBI), stock exchanges, Securities and Exchange Board of India (Sebi) will take 15 to 18 months. Till all the approvals are in place, both HDFC Ltd and HDFC Bank will operate as separate entities. HDFC Bank is a domestically important systemic bank (D-SIB) from RBI’s point of view. The share exchange ratio for the amalgamation of the corporation with and into HDFC Bank will be 42 equity shares of face value of Re 1 each of HDFC Bank for every 25 fully paid-up equity shares of face value of Rs 2 each of the corporation. Post the merger, HDFC Bank will be 100 per cent owned by public shareholders and existing shareholders of HDFC Limited will own 41 per cent of HDFC Bank. Deepak Parekh, Chairman, HDFC Ltd, said, “After 45 glorious years of providing home loans to over 9 million customers, the time is right for HDFC to find a new home. Our new home is with our family, with our own people, but it’s bigger, better and significantly more promising”. One of the triggers for the deal was narrowing of regulatory arbitrage that existed between the banks and NBFCs by harmonising the regulations governing the NBFCs with that of banks. RBI has also been encouraging large NBFCs to convert into banks. The gap in liquidity requirements between a bank and NBFCs has also been reduced.

As a result, it is going to be difficult for NBFCs to operate and maintain the same levels of profitability as they have done in the past. Another reason for the merger, as the management of the two entities explained, is the current favourable interest rate regime. Cheaper cost of funds would imply that the bank can infuse additional money for statutory liquidity ratio (SLR) and cash reserve ratio (CRR) requirements. “It’s something that we have evaluated over the years. In the past, it did not make sense for a variety of reasons. One is, at that time, the CRR, SLR requirement was a lot higher than what it is now. Secondly, interest rates are significantly lower than what they used to be,” said Keki Mistry, vice chairman and chief executive officer of HDFC. “Today the financial cost of a merger is limited. Once the merger is done, we should be EPS accretive from day one because 21 per cent of our shareholding in HDFC Bank gets cancelled,” Mistry said. Parekh said HDFC Bank has requested the banking regulator for a phased-in approach to comply with the cash reserve ratio, statutory liquidity ratio, priority sector lending for the HDFC loans that will be transferred to the bank, and grandfathering of certain assets and liabilities and in respect of some subsidiaries. A report by Macquarie Research has pointed out that the bank will have an excess SLR/CRR asset requirement of approximately Rs 70,000 crore – 80,000 crore and will also need an incremental Rs 90,000 crore agriculture portfolio (based on 18 per cent of borrowings) to meet priority sector lending norms. “While the merger will increase the bank’s product portfolio and ability to cross-sell, we think there will also be a drag on its P&L due to PSL requirements and higher SLR/CRR requirements,” the report added. Also, with the housing loan market on an upswing, the merger will broaden the product base for HDFC Bank, which unlike its peers does not have a huge share of mortgage loans in its portfolio. “While we have grown at a CAGR of 25 per cent over the last five years on mortgage, the proportion of mortgage in our book is just 11 per cent. When the regulatory approvals do come in, we have an opportunity to unleash the mortgage product in all our distribution points” Sashidhar Jagdishan, MD & CEO, HDFC Bank, said. While Jagdishan will lead the merged entity as the MD & CEO of the bank, it’s not clear what role Keki Mistry, current vice chairman and CEO of HDFC Ltd, will play post the merger. Parekh made his intentions clear by stating that his age will bar him from being on the board of the bank. “As far as Keki Mistry is concerned, he is 67 years old. So, he may have a year or year and a half to be a director on the board of the bank. He will not be a full time executive and he does not want to be a full time executive, not that we don’t want him,” Parekh said. Subsidiaries and associate companies of HDFC Ltd will continue to be owned by HDFC Bank. This will facilitate more efficient cross selling of banking and financial services products, including insurance and mutual funds, the management said. 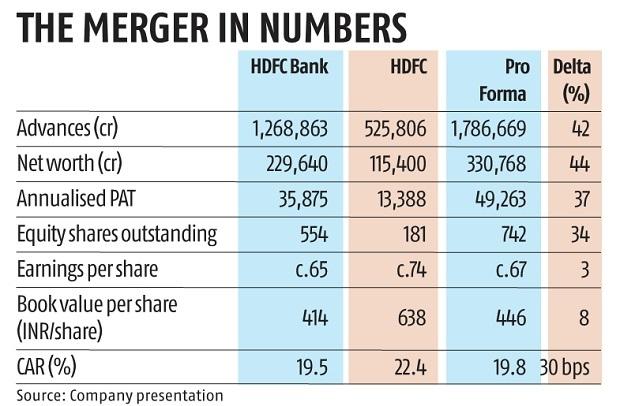