Rajeswari Sengupta writes: There are serious problems with India’s GDP data. Any analysis of recovery or growth forecast based on this data must be taken with a handful of salt. 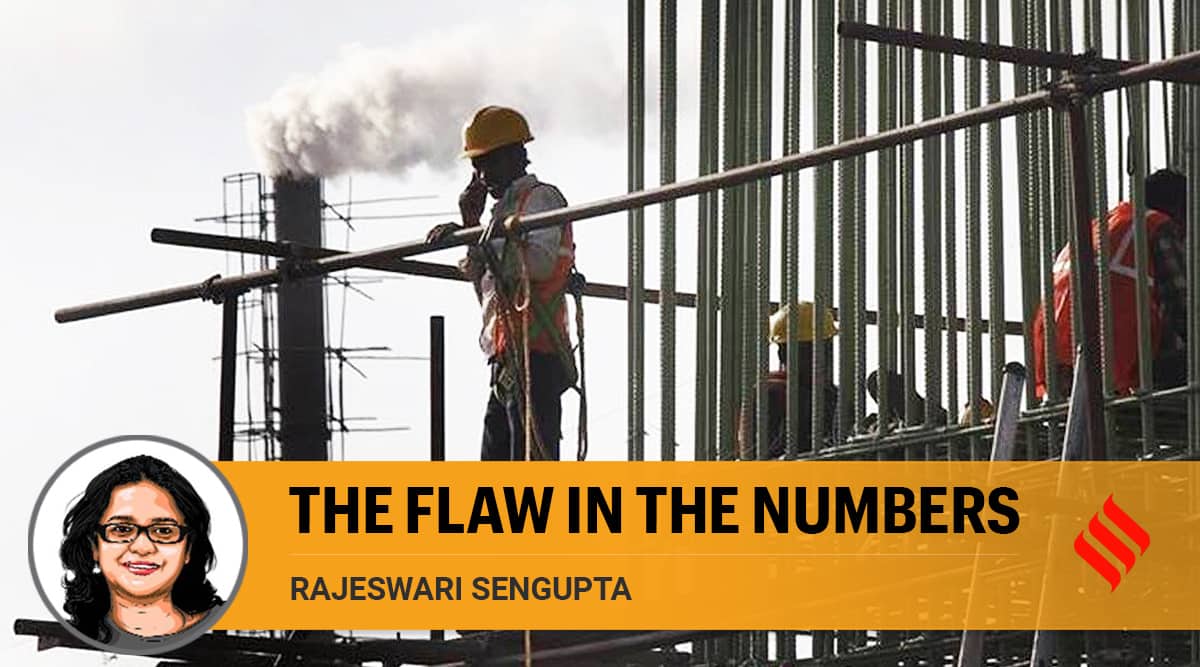 Another reason why growth might be underestimated is that the NSO has not updated the sectoral weights.

The primary yardstick analysts use to measure the economy’s health is GDP. The RBI and multilateral agencies use GDP statistics to make claims about the future growth path. But how reliable is the Indian GDP data?

The NSO released the current GDP series in 2015, using 2011-12 as its base year. Since then, the new series has been embroiled in controversy. Some have argued that the problem in the new series is the real growth rate. This is debatable. Scholars have pointed to measurement problems, both in the nominal and real GDP growth rates. Yet none of those problems has been addressed. As a result, the measurement errors still persist. There are three major reasons why the GDP data, and hence any narrative of economic recovery based on it, are questionable.

First, the growth rate of real GDP is contaminated by the “double deflation problem”. The new series entailed a shift from a volume-based measurement system to one based on nominal values, thereby making the deflator problem more critical. Simply put, the NSO calculates real GDP by gathering nominal GDP data in rupees and then deflating this data using various price indices. The nominal data needs to be deflated twice: Once for outputs and once for inputs. But the NSO — almost uniquely amongst G20 countries — deflates the nominal data only once. It does not deflate the value of inputs.https://images.indianexpress.com/2020/08/1×1.png

To see why this is a problem, consider what happens when the price of imported oil goes down. In that case, input costs will fall and the profits recorded by Indian firms will rise. This increase in profits is merely the result of a fall in input prices, so it needs to be deflated away. After all, GDP is meant to measure the amount of production in the country, which hasn’t changed, at least in the first instance. But the NSO doesn’t deflate away the increase in profits. Instead, it records a purely nominal increase as a real increase in GDP, thereby overstating growth. Simulations have shown that this effect can be substantial.

Since the cost of inputs is measured by the WPI (wholesale price index), a crude measure of the overestimation caused by the absence of “double deflation” is given by the gap between the WPI and the CPI (consumer price index). In the 2014-2017 period, oil prices plunged, causing the WPI to fall sharply relative to the CPI. This meant that real growth was probably overstated.

In the last few months, the exact opposite has been happening. WPI inflation is soaring. It reached 14 per cent in November, while CPI inflation has “only” been 5 per cent. The rapid increase in the WPI relative to the CPI is imparting an upward bias to the deflator, which increased at the remarkable rate of 8 per cent in the second quarter of 2021-22. If this deflator is being overestimated, then real GDP growth rate could be underestimated right now. Some have argued that the deflators were improved in the new series by shifting to the CPI, but the fact remains that in many cases the WPI is still used for deflation.

A second reason why growth might be underestimated is that the NSO has not updated the sectoral weights. When it calculates GDP, it takes a sample of activity in each sector, then aggregates the figures by using sectoral weights. To make sure that the weights are reasonably accurate, the NSO normally updates them once a decade. It has now been more than 10 years since the weights were changed, and there are no signs of a base year revision. As a result, the sectoral weights are still based on the structure of the economy in 2010-11, when in particular the information technology sector was much smaller. In other words, the fast-growing IT sector is being underweighted, which implies that GDP growth is being underestimated.ExplainSpeaking |How the Indian economy performed in 2021

But before we jump to conclusions, we need to take into account the third measurement problem — this works in the opposite direction. Measurement of the unorganised sector has always been difficult in India. Once in a while, the NSO undertakes a survey to measure the size of the sector. In the meantime, it simply assumes that the sector has been growing at the same rate as the organised sector. This practice was working well when the two sectors were moving in tandem.

Despite these shocks, the NSO does not seem to have made any adjustments to its methodology for estimating the growth of the unorganised sector. They continue to assume that unorganised sector enterprises have been growing as fast as those in the organised sector. In that case, there would be an upward bias to the reported GDP growth.

So, what is the bottom line? Can we say whether the latest GDP numbers overstate or understate growth? The answer is no, because the measurement problems go in different directions. Without more information from the NSO on their methodology we cannot say whether the positive factors outweigh the negative one, or vice versa. What is clear, however, is there are serious problems with India’s GDP data. Any analysis of recovery or growth forecast based on this data must be taken with a handful of salt.

This column first appeared in the print edition on January 4, 2022 under the title ‘The flaw in the numbers’. The writer is Associate Professor of Economics, IGIDR