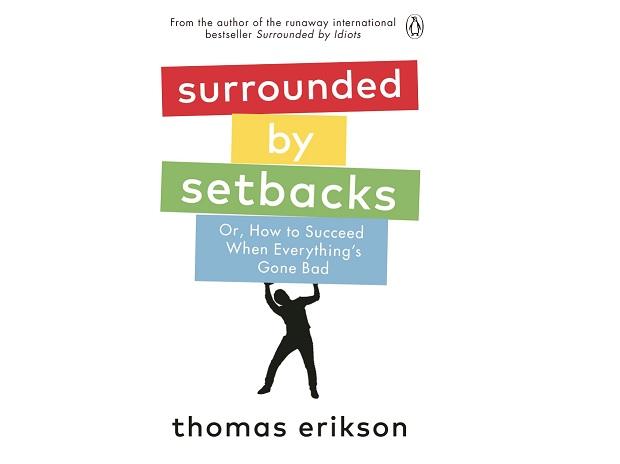 Surrounded by setbacks: Or, how to succeed when everything’s going bad

Surrounded by setbacks: Or, how to succeed when everything’s going bad

Before a reader picks up this book, he is likely to ask, and justifiably so, what qualifies the writer to proffer advice on handling setbacks. Has he handled any himself? Plenty, it seems.

As Thomas Erikson recounts, he wrote books and sent them to publishers. For 20 long years, all he had to show for the 1,000 hours he put in each year was rejection letters by the score. And yet he stuck with it, until he made it through what he calls the eye of the publishing industry’s needle.

The first of Buddha’s Four Noble Truths teaches us that life consists of suffering, pain and misery. Mr Erikson, a Swedish behavioural expert, too, asks readers to accept that setbacks are an inherent part of life. He suggests they list all those they have encountered so far and rank them from zero to 100—zero for a minor setback and 100 for a real catastrophe. Such an exercise, according to him, will provide perspective. You will realise that many of the setbacks that you thought heralded the end of your world when they happened weren’t so bad after all. You will also conclude that having survived so many setbacks, you do possess some resilience and can take on many more.

Mr Erikson then asks readers to write down what they learned from each setback. When you complete this task, it will dawn upon you that each one of them left you with a useful lesson. Smaller setbacks, he says, should be welcomed. Dealing with them is like exercising your muscles — you get stronger and better equipped to deal with bigger setbacks. And make no mistake about it, one will strike some time or the other, however cocooned your life may appear at present.

Mr Erikson’s panacea for dealing with setbacks is to accept responsibility. Tell yourself that you, and you alone, are responsible for your fate. Stop blaming bad parenting, your education (or lack of it), nincompoop boss, inconsiderate spouse, and so on for your current problems. Once you adopt this attitude, you will find it liberating, even empowering. Instead of waiting for good things to happen, you will work on improving yourself and crafting a better future.

Readers should pay heed to the chapter in which Mr Erikson spells out the four stages through which one passes when trying to learn something new. In the first stage — high will, low skill—a person is full of enthusiasm but his capacity to accomplish the new task is low. Once some time has elapsed, he enters the second stage of low will and low skill. He realises that what he has undertaken is much harder than he had imagined. This is the stage when most people abandon new endeavours.

But if he persists, he manages to reach the third stage. By now his skill level has improved. He is approaching the end of the tunnel. But he doesn’t quite know that, so there is still the risk that he may abandon the endeavour close to the finishing line.

At last comes the fourth stage when he is high on both will and skill. Now he has momentum or “flow” on his side. The new skill no longer requires much effort and, in fact, becomes a cinch.

The point about these four stages is that they are inevitable. Whenever you try out something new, you will hit a trough when the outlook will appear bleak. But if you persist, you will move past it and things will look up.

A key takeaway of this book is how the law of compounding works its magic in our lives. The author suggests that one should avoid taking on too much at one go. Make small, incremental changes for the better: Exercise, read books that help you break new ground, or work on developing new skills. Between someone who adopts this approach of gradual, constant development, and someone who doesn’t, the gulf after a decade or so will be vast.

Success, however, requires patience as results can sometimes manifest themselves after a long while. In the meantime, enjoy the process. As the author says of his own days of struggle, he stuck to writing despite numerous rejections because he enjoyed the task. Treating your work as a labour of love will ease the pain of those times when no rewards appear to be forthcoming.

Mr Erikson’s book is an easy read. There is a smoothness to his writing that will allow you to race through its 300-odd pages without realising you have covered so much ground. His advice is simple and practical. More real-life stories would have enhanced its appeal.

If you have fallen into a rut but believe you can do much better, this is a book that can help you raise your life to a higher orbit.