Harish Damodaran, Samridhi Agarwal write: It may be closer to 40 million than the consensus range of 100-150 million. This has great implications for agricultural policy. 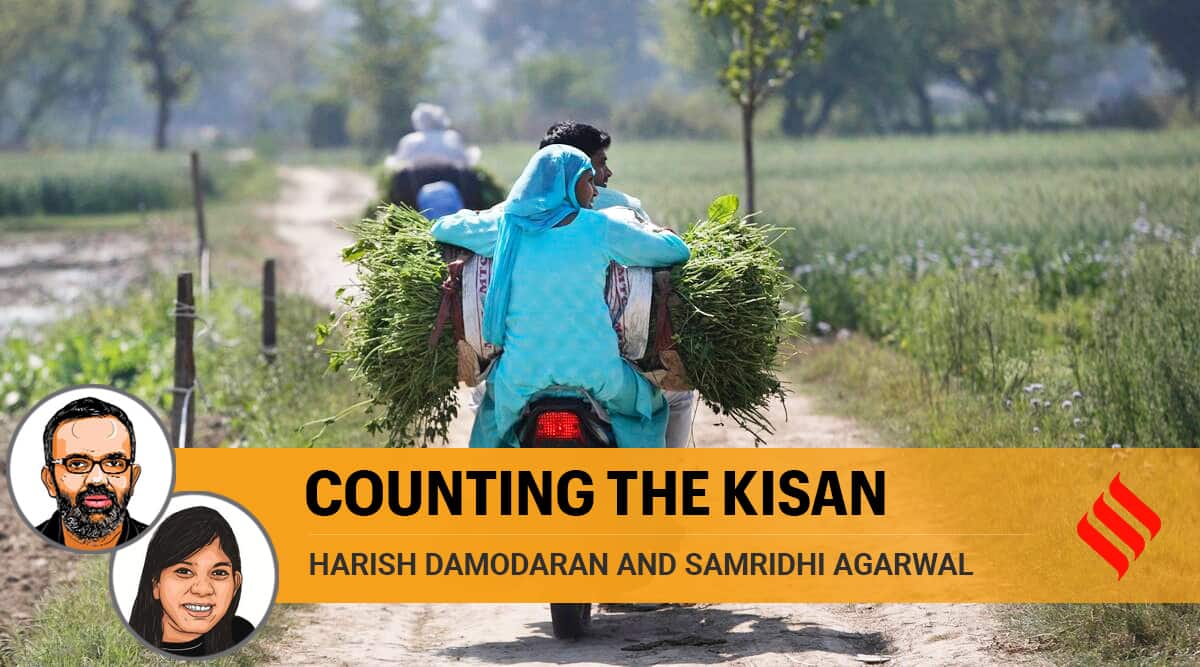 What we have done is take the SAAH figure of 93.09 million — which is, at best, an upper limit — and estimate from it the agricultural households that are significantly farm income-dependent. (AP)

The last Agriculture Census for 2015-16 placed the total “operational holdings” in India at 146.45 million. The Pradhan Mantri-Kisan Samman Nidhi (PM-Kisan) scheme has 110.94 million beneficiaries who got their Rs 2,000 income support installment for April-July 2021. And now, we have the National Statistical Office’s Situation Assessment of Agricultural Households (SAAH) report for 2018-19. It pegs the country’s “agricultural households” at 93.09 million. In short, India officially has anywhere from 90 million-plus to almost 150 million farmers.

This wide variation has largely to do with methodology. The Agriculture Census looks at any land used even partly for agricultural production and operated/managed by one person alone or with others. The land does not have to be owned by that person (“cultivator”), who needn’t also belong to an “agricultural household”. The SAAH report, on the other hand, considers only the operational holdings of agricultural households. Members of a household may farm different lands. While the Census treats each of them as separate holdings, the SAAH takes all these lands as a single production unit. It does not count multiple holdings if operated by individuals living together and sharing a common kitchen.

Accounting for only “agricultural households”, while not distinguishing multiple operating holdings within them, brings down India’s official farmer numbers to just over 93 million. But even this figure is an exaggeration, given the SAAH’s own rather expansive definition of “agricultural households”. The latter covers households having at least one member self-employed in agriculture and whose annual value of produce exceeds Rs 4,000. Such self-employment needs to be for only 30 days or more during the survey reference period of six months (in this case, the two halves of the July 2018-June 2019 agricultural year).https://images.indianexpress.com/2020/08/1×1.png

What we have done is take the SAAH figure of 93.09 million — which is, at best, an upper limit — and estimate from it the agricultural households that are significantly farm income-dependent. They would, in our view, constitute “serious”, “full-time” or “regular” farmers.

The SAAH report gives data on agricultural household income from farm and non-farm sources, both state-wise and across different land-possessed/operational holding size classes. Non-farm income includes that from wages/salary, business, leasing out of land and pension/remittances. For farm income, we have factored in net receipts from crop production as well as animal husbandry (dairying, poultry, goat/sheep rearing, piggery, beekeeping, aquaculture, sericulture, etc).

We would categorise “full-time/regular” farmers as those households whose net receipts from farming are at least 50 per cent of their total income from all sources. The farm income dependence ratios have, accordingly, been worked out for all states and across holding sizes (from below 0.01 to 10 hectares and above). The SAAH report also has state-wise estimates of agricultural households for each land-possessed size class. By taking only those size classes in which the dependence ratios are higher than (or close to) 50 per cent, and adding up the corresponding estimated number of agricultural households, we are able to arrive at the total “full-time/regular” farmers for each state.

Using the above methodology, the number of “full-time/regular” farmers has been calculated for all states (see table; a more detailed note with charts is available at the CPR website). Andhra Pradesh, for instance, has 31.59 lakh agricultural households. But the 50 per cent farm income threshold is crossed only for households possessing more than two hectares of land. They number just 7.46 lakh, or 23.6 per cent of the state’s total agricultural households. India’s “serious” farmer population, in turn, adds up to 36.1 million, which is hardly 39 per cent of the SAAH estimate. The 36 million-plus number — or, say, 40 million — is also close to a previous 47-50 million estimate of “serious full-time farmers” made by one of us (https://bit.ly/3CLmc7S).

If the actual number of farmers deriving a significant share of their income from agriculture per se is only 40 million — as against the official, also popular, consensus range of 100-150 million — a host of policy implications follow. To start with, one must recognise that farming is a specialised profession like any other. Not everyone can or needs to be a farmer. “Agriculture policy” should, then, target those who can and genuinely depend on farming as a means of livelihood.

Minimum support prices, government procurement, agricultural market reforms, fertiliser and other input subsidies, Kisan Credit Card loans, crop insurance or export-import policy on farm commodities will matter mainly to “full-time/regular” farmers. Even PM-Kisan would be more effective if directed at these farmers, whose quantum of income support can be enhanced to encourage them to remain in or expand their agriculture business.

Secondly, land size matters. The SAAH report reveals that the 50 per cent farm income dependence threshold is crossed at an all-India level only when the holding size exceeds one hectare or 2.5 acres. This is clearly the minimum land required for farming to be viable, which about 70 per cent of agricultural households in the country do not possess.

It links up with the final point: What should be done for this 70 per cent, who are effectively labourers and not farmers? Their problems cannot be addressed through “agriculture policy”. A more sustainable solution lies in reimagining agriculture beyond the farm. Crops may be produced in fields, but not everyone needs to engage in cultivation. The scope for value-addition and employment can be more outside than on the farm — be it in aggregation, grading, packaging, transporting, processing, warehousing and retailing of produce or supply of inputs and services to farmers. All these activities legitimately fall within the realm of agriculture, even if outside the farm. Agriculture policy should aim not only at increasing farm incomes, but also adding value to produce outside and closer to the farms.

This column first appeared in the print edition on October 4, 2021 under the title ‘Counting the kisan’. Damodaran is National Rural Affairs & Agriculture Editor, The Indian Express and is currently on sabbatical as Senior Fellow with the Centre for Policy Research. Agarwal is Research Associate with CPR.