Aditi Nayar writes: It is unlikely to do so in the coming quarter, although the uptick in vaccinations could impart a positive momentum to the economy. 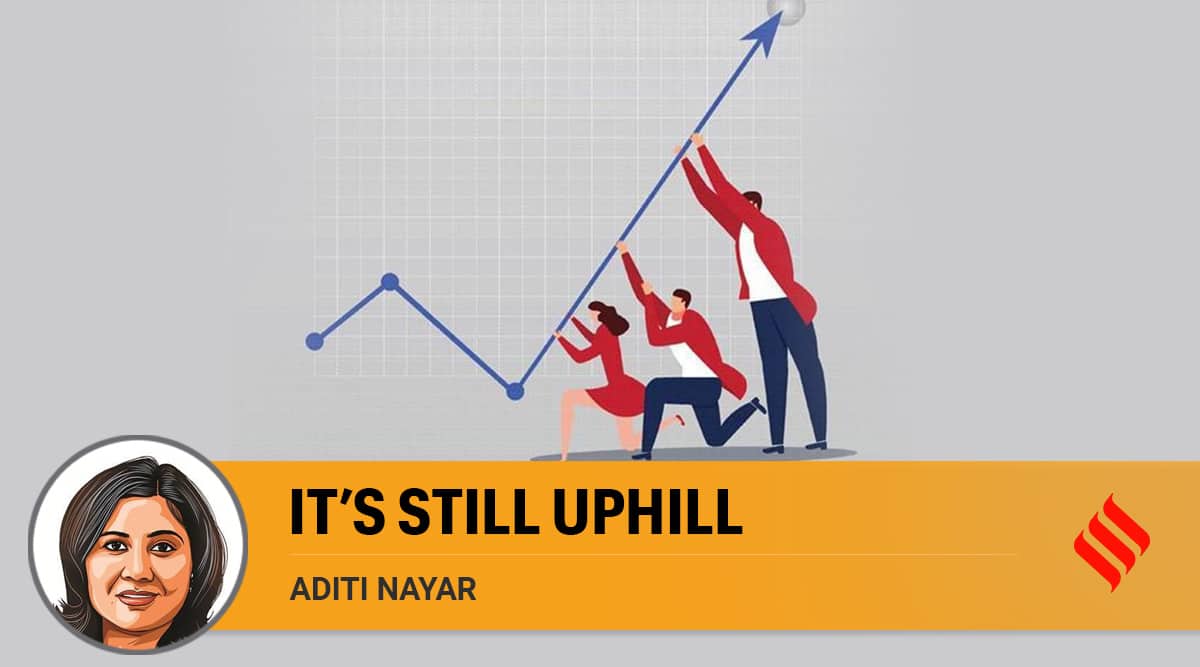 India’s real GDP has expanded by a record-high 20.1 per cent (year-on-year) in the first quarter on the low base.

The impact of the second wave was a considerable 9.2 per cent compression in the real GDP relative to the pre-Covid level. Incidentally, the corresponding change displayed by other large economies over the same period ranged from a moderate contraction of 3.9 per cent for Italy to a stellar growth of 11.5 per cent for China. The US reported a rise of 2 per cent, benefitting from the earlier coverage of vaccines over a larger proportion of its population.

Coming back to the drivers of aggregate demand in India, both private consumption and investment trailed their pre-Covid levels in the first quarter of the ongoing year by 12 per cent and 17 per cent, respectively. While farm demand remained resilient after a series of healthy harvests, the loss of employment and incomes in swathes of the non-farm rural and urban economy as well as higher medical and fuel expenses, contributed to the overall squeeze in private consumption. Investment plans were put on hold by the private sector amidst the second wave, even though government capital spending, especially that of the central government, put up a healthier performance even as government consumption spending exceeded the pre-Covid level by a healthy 7.4 per cent in the first quarter.https://images.indianexpress.com/2020/08/1×1.png

Let’s first look at the fiscal metrics of the central government. The Centre’s revenue expenditure rose by 7.8 per cent, led by non-subsidy spending. Moreover, its capital expenditure nearly doubled to Rs 1.1 trillion, from the muted Rs 0.6 trillion that had been recorded amidst the parliamentary elections and implementation of the model code of conduct.

Despite this, the Centre’s fiscal deficit declined to a modest Rs 2.7 trillion from the pre-Covid level of Rs 4.3 trillion. This is due to an increase in its revenue receipts, benefitting from the upfronting of the Reserve Bank of India’s (RBI) surplus of around Rs 1 trillion to the first quarter of this year, from the second quarter of 2019-20, following a realignment in its accounting year to April-March in line with that of the Government of India. But, the Centre’s overall gross tax revenues have also grown, with rises seen across the board — corporation tax, personal income tax, and excise duty collections.

The considerable rise of 47 per cent in the direct tax collections is at odds with the decline in the GDP in Q1 FY2022 relative to Q1 FY2020. A likely conclusion is that the formal/tax-paying portion of the non-agri economy has gained at the cost of the rest.

For the 19 major states whose data has been published by the Comptroller and Auditor General (CAG), we observe a substantial increase in their revenue spending — Rs 4.9 trillion in the first quarter of 2021-22, relative to the pre-Covid level of Rs 4.3 trillion. This possibly reflects higher social sector spending amid the second wave of the pandemic. These states have also seen their capital spending exceed their pre-pandemic levels.

However, in contrast to the compression observed in the Centre’s finances, these 19 states have seen their fiscal deficit nearly double to Rs 1.1 trillion this year, up from Rs 0.6 trillion the year before. This is because the states’ combined revenue receipts in the quarter were only marginally higher than the pre-Covid level. This can be traced to lower tax devolution from the Centre (relative to pre-Covid levels) and the subdued taxes of the states.

The decline in states’ own taxes, which are predominantly indirect in nature, broadly resonates with the contraction in private consumption this year as compared to its pre-Covid level. In particular, despite attractive home loan rates and cuts in stamp duty rates by some of the states, collections this year were substantially lower than pre-Covid levels, revealing the continued impact of the pandemic on states’ finances. On the other hand, the lower tax devolution in the first quarter, in our view, only represents a timing mismatch, with the budgeted target for the current fiscal modestly higher than the actual devolution in 2019-20.

Looking ahead, GDP will have to grow by 8 per cent (year-on-year) in the ongoing quarter to equalise to the pre-Covid level. Our current forecasts suggest that a continued lag in demand for contact-intensive services may narrowly prevent this from being achieved.

However, the pace of Covid-19 vaccinations has been ramped up since mid-August — this offers the best conceivable insurance to dampen the potency of another wave. If the seven-day moving average of 7.3 million doses/day as of September 5 can be sustained, 64 per cent of adults will have received their second shot before the year draws to a close. This could impart a positive momentum to the economy, pushing it above the pre-Covid level in the second half of the year.

This column first appeared in the print edition on September 13, 2021 under the title ‘It’s still uphill’. The writer is chief economist, ICRA.