Nandita Rao writes: It appears that over the past decade, the relationship between the bar and bench has gone from one of mutual respect and equality to the one between ruler and ruled 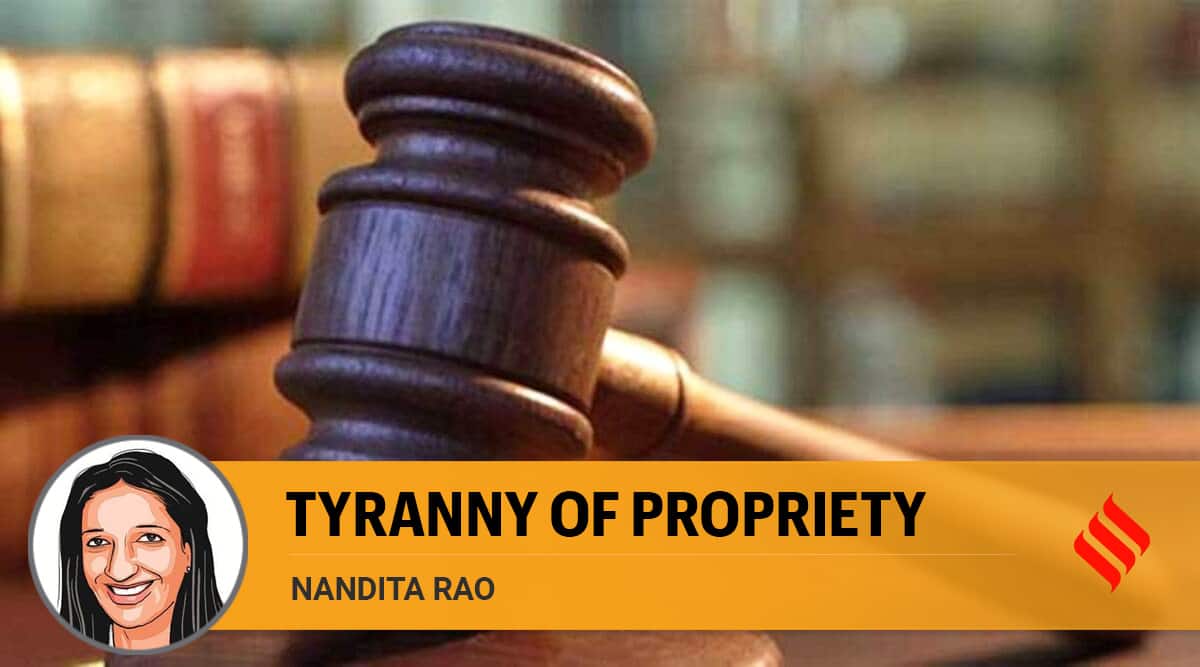 Of no less importance is the fact that propriety has no objective yardstick by which anyone’s conduct can be tested.

Norms of propriety once legitimised the forced marriage of a prepubescent girl to a man old enough to be her grandfather. They permitted the buying and selling of human beings as slaves and endorsed the silence of a judicial system and civil society while men, women and children were deprived of all civil rights and gassed to death, simply on account of the religion they professed. Propriety is a dangerous yardstick by which to judge a person, because in a society whose polity and institutions are threatened by moral decay and ideological corruption, it often justifies the silencing of truth, the criminalisation of dissent and the perpetuation of cowardice in the face of injustice and blatant illegality. Of no less importance is the fact that propriety has no objective yardstick by which anyone’s conduct can be tested. There are still communities where educating a daughter could result in social ostracism, while dowry demands, despite being illegal, are accepted without a murmur.

It is, therefore, unfortunate that the legal profession remains largely regulated by norms of propriety that are disproportionately used to control the bar and keep it from challenging any actions of the bench that may be opaque and arbitrary. While orders can be challenged by appeal, improper roster management, unfair collegium recommendations, blatant bias in favour of select counsels and conflict of interest in hearings fall in the grey zone of impropriety, which affect the dispensation of justice and yet have no formal mechanism of redressal. It is assumed that the bar and the open court system would ensure that these actions are called out and corrected. However, a lawyer’s licence can be denied due to “ungentlemanly conduct” under the Bar Council rules. A lawyer can be denied designation as a senior advocate, despite obvious and demonstrated legal merit and integrity. Just as easily, recognition can be withdrawn from those designated as senior, without any criteria being established a priori to define the “propriety” expected of lawyers in the face of grave impropriety by the bench. The lack of consistency and uniformity in bestowing these punishments further the perception of persecution.Must Read Opinions

The use of criminal contempt against members of the bar has become commonplace over the last decade. From something as small as a tweet to actions as necessary as strikes, all are clubbed with conduct which is scandalising or lowers the authority of any court. This is done without scrutinising whether the authority of the court was being exercised within the confines of legality and whether the intent of the members of the bar was to scandalise or lower the authority of the court. The objective appears to be to create an atmosphere of fear among members of the bar. Such an objective cannot further the majesty of a judicial institution, because respect cannot be demanded; it must be commanded.https://images.indianexpress.com/2020/08/1×1.png

The British Empire sorted out disputes between “gentlemen” over a cup of tea, as it were, while harsher action was reserved for the natives who were believed to be incapable of gentlemanly methods of resolution and had to be shown the stick. It appears that over the past decade, the relationship between the bar and bench has gone from one of mutual respect and equality to the one between ruler and ruled. Obedience is rewarded, while independent thought is seen as a threat to the system and a bad example to the next generation of lawyers.

Independent thinking has always been perceived as a threat. Socrates was put on trial and awarded the death penalty for teaching people to think. His prosecutors maintained that he worshipped gods the state did not and introduced new divinities, but most of all he was guilty of corrupting the young by teaching them accordingly. In his defence, Socrates argued, “I have something more to say, at which you may be inclined to cry out; but I believe that to hear me will be good for you, and therefore I beg that you will not cry out, I would have you know, that if you kill such a one as I am, you will injure yourselves more than you will injure me.” His words seem to be a warning that in societies where norms of propriety reward silence and obedience, evil can assume brazen proportions.

A court’s authority is built by its judgments and its majesty is based on the ordinary citizen’s confidence that the court stands between him and unjust executive action. No critic can lower the authority or majesty commanded by independent and robust courts, and silencing any criticism will not restore lost authority or majesty.Chennai News

This column first appeared in the print edition on September 9, 2021 under the title ‘Tyranny of propriety. The writer is a Delhi-based lawyer