In a span of a day M N Srinivasu (Vasu), Ajay Kaushal and Karthik Ganapathy have become the latest demi-gods of Indian entrepreneurial story 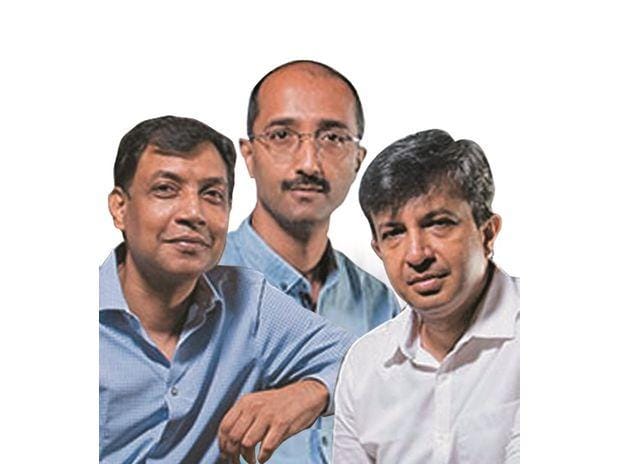 BillDesk —founded by (from left) M N Srinivasu, Karthik Ganapathy, and Ajay Kaushal — was acquired for $4.7 billion by PayU in one of the largest deals in the payments industry

In a span of a day M N Srinivasu (Vasu), Ajay Kaushal and Karthik Ganapathy have become the latest demi-gods of Indian entrepreneurial story. Their company, BillDesk, founded in 2000, was acquired for $4.7 billion by PayU in one of the largest deals that the payments industry has seen.

BillDesk is a well-known payment gateway and is the largest in the utilities bill payment segment, but finding details of founders who started this company is just the opposite.

There is little that you will find about them as individual people, other than the fact that the trio met at the now defunct accountancy giant Arthur Andersen and then decided to start their entrepr­eneurial journey. Vasu is an IIM-A graduate and a student of Madras University. And before joining Arthur Andersen he spent 20 years at ITC.

Before starting BillDesk, Ajay Kaushal was with SBI Capital Markets. He graduated from IIT Madras, and completed his PGDM from IIM Lucknow. And the most elusive of all is Karthik Ganapathy, who has been the key architect of BillDesk’s technology and operations. He is an alumnus of IIT-Bombay and has an MBA from IIM-Bangalore.

The other thing that the three have in common is that they are from Mumbai. Kaushal, who has had a childhood of moving cities because his father was in the army, Mumbai was the city where he got his first job and became an instant home. It also tells the story of how Mumbai, a hub for entrepreneurs and the financial world, has lost ground to Bengaluru. The three prominent players of the payment industry then —BillDesk, CCAvenue and ItzCash —were all Mumbai-based.

Even if you speak to industry people who have known them, they talk about the three as a team rather than individuals. Naveen Surya, the founder of ItzCash, was building his fintech firm at the same time. “They were a very focused team and knew what they wanted to build. Even as we were building our business we looked at BillDesk for best practices, they were well-respected even then for what they were creating. I think between BillDesk, CCAvenues and ItzCash, the foundation of India’s payment industry was being laid down,” said Surya, now chairman emeritus National Payment Council of India. ItzCash was acquired by Ebix in 2017 for Rs 800 crore.

In a recent interview to the Forum of Industry and Academic Knowledge Sharing, when Vasu was asked why they are not seen in media or on social media talking about their business, he offered a simple explanation: “We chose to work on the online bill payment side and for that we had to build an ecosystem for which we had to convince the financial players and utility players to join our platform,” he said.

Rahul Khanna, co-founder and managing partner, Trifecta Capital, was one of the earliest investors in BillDesk. He was then part of Clears­tone Ventures and was on board of BillDesk from 2006 to 2011. “I had known Ajay and Vasu from the early days of BillDesk when they had created a payments solution for my old employer Hutchison Max. When I met them again as an investor we took a bet on them because we knew the team and their focussed execution approach. What was unique about their strategy was they focused on locking up lots of biller relationships and used the B2B2C model through banks rather than the B2C model, which Bill Junction did,” Khanna said.

The choices that the founders took to raise capital and stay away from some of the buzzwords that ruled the 2000s is also refreshing. For instance, the first choice for raising their seed capital were two public sector sector financial players—SIDBI and Bank of Baroda. This was again a deliberate choice. “It took us 18 months to convince these financial institutions as to why they should invest in us. Not that there were not PE or VCs around. Our efforts were to create credibility levers for our business,” said Vasu in that interview.

With Infosys going public in 1993 the Indian tech landscape was obsessed with ESoPs, but BillDesk over its 20 years of existence has only 3.9 per cent of its shares in ESoPs. Vasu has stated that though ESoP is a tool to share the wealth created by the organisation with the people who create it, it is not necessarily needed for retaining people. “Sometimes there is enough conviction among the employees that when an event such as this happens, there will be fair sharing of the value. Entities such as Tata’s and Birla have been created without giving ESoPs,” he said.