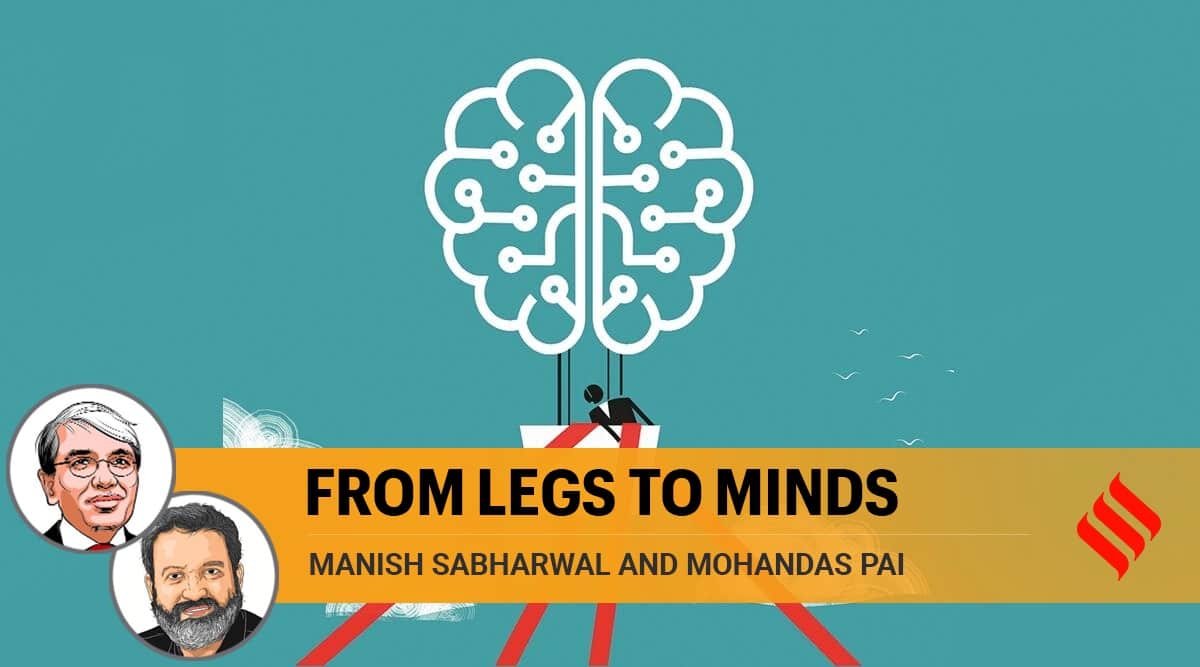 Imagine if we spent the next 25 years unleashing the entrepreneurial energies of 1.3 billion Indians — 65 per cent of whom are below 35 years old.

In 1893, a 12-day sea journey from Japan to Canada sparked multiple conversations between two remarkable Indians travelling independently to attend the World Parliament of Religions and a Technology Expo. Swami Vivekananda convinced Jamsetji Tata that technology can be imported but scientific temper cannot be bought and must be built within a country. A direct outcome of this chance encounter was Jamsetji setting up the Indian Institute of Science in Bangalore. An indirect outcome was a technology-encouraging culture at the Tatas that pioneered India’s software industry in the 1960s: India now exports more software than Saudi Arabia does oil. Covid and recent Chinese events have increased India’s attractiveness to global investors. We make the case for unshackling 1.3 billion Indians with a surgical strike on the regulatory cholesterol that sabotages our productivity.

Last Independence Day brought an exciting addition to big reforms like GST, MPC and IBC. The PM announced that 15,000 of our current 69,000+ employer compliances and 6000+ filings have been identified for removal. This abolition will accelerate formal employment and reduce corruption but must be paired with overdue reform to the accountability, culture and incentives of 25 million civil servants that breed this cholesterol and resist its rationalisation, decriminalisation and digitisation.

Let’s step back. India is a development economics outlier: Few models predict a $2,500 per-capita income country with five million people writing software, internet data costs per GB at 3 per cent of US levels, 1.2 billion people empowered with paperless digital identity verification, 3.5 billion real-time monthly digital payments, $10 billion in private equity raised in July, and a $3 trillion public market capitalisation. Harvard’s Ricardo Hausman believes the only sustained predictor of sustained economic success is economic complexity and suggests that India’s prosperity is less than our economic complexity would predict. India@75 doesn’t have a shortage of land, labour, or capital but misses their combining productively at scale to create well-paying jobs.https://images.indianexpress.com/2020/08/1×1.png

Our software industry is an oasis of high productivity — 0.8 per cent of India’s workers generate 8 per cent of GDP. The mandatory global digital literacy programme and digital investment super-cycle sparked by Covid in education, medicine, shopping, office work, payments, restaurants, and entertainment will double our software employment in five years. Consequently, India will have the switching costs in software that China has in manufacturing. But there is another delightful consequence of our software industry’s talent, alumni, and global engagement — 50,000 tech startups that have raised over $90 billion since 2014 from 500+ institutional investors. India’s software services industry and tech startups are each estimated to be worth about $400 billion today. By 2025, we expect India’s startup universe value to grow to $1 trillion.

The divergent destiny of India’s software and manufacturing exports has many reasons but one is the different regulatory thought worlds of the Software Technology Parks India rules of 1991 (STPI) and the Special Economic Zones Act of 2005 (SEZ). STPI’s genius was simplicity. It allowed rebadging existing assets, embraced trust over suspicion, and adopted self-reporting that was largely paperless, presenceless, and cashless. SEZs largely replicated the regulatory cholesterol and distrust that has made India an infertile habitat for employment-intensive industries.

A single factor can’t explain divergent STPI vs SEZ outcomes but regulatory cholesterol is surely one of the reasons why it took 72 years for 1.3 billion Indians to cross the total GDP of 66 million Britishers. Covid reminds us that raising our per-capita GDP (138th world ranking) matters more than raising our total GDP (5th world ranking). Raising per-capita needs high productivity manufacturing and domestic services firms that disrupt our low-level equilibrium of labour handicapped without capital and capital handicapped without labour.

India’s software services and tech startups are built on India’s openness, consistency and fairness. China’s magnificent 80 times rise in per-capita GDP over 40 years has also been built on these principles. Until recently, their tech industry seemed unstoppable — half of their 160 unicorns (startups worth more than a billion dollars) operate in AI, big data, and robotics. But this is changing. Over 50 recent regulatory actions against China’s tech industry have already cost investors over $1 trillion. It’s risky to underestimate China but let’s not underestimate the impact of the Chinese communist party replacing Deng Xiaoping’s pragmatic genius with an opaque “common prosperity” on India’s attractiveness to factories, multinationals, startups, venture capital and pension funds.

This article’s title comes from the remarkable Kenyan, Eliud Kipchoge, who suggests that the first half of a marathon is run on your legs and the second half on your mind. His insight captures the middle-income trap or developing country stagnation that comes from failing to transition from more inputs of land, labour and capital to the fourth factor of production; imagination, technology, and entrepreneurship. India’s industries built on minds — our software services and startup ecosystem have exploded India’s global soft power by reaching revenue and valuation possibilities that felt unimaginable — have curiously come before physical infrastructure, farm employment reduction, and higher women’s labour force participation. Massifying our prosperity needs massive formal, non-farm job creation. Creating the productive firms that will offer these jobs to our young needs replicating the regulatory trust and simplicity that our technology industry enjoys in the rest of our economy.

Imagine India@100 if we cut regulatory cholesterol today and spent the next 25 years unleashing the entrepreneurial energies of 1.3 billion Indians — 65 per cent of whom are below 35 years old. As Verghese Kurien of Amul — who began his career as an apprentice at Jamsetji’s Tata Steel and whose domestic science obsession would have made Vivekananda proud — reminded us: “We must build on the resources represented by our young … without their involvement, we cannot succeed. With their involvement, we cannot fail.”

This column first appeared in the print edition on September 3, 2021 under the title ‘From legs to minds’. Sabharwal is Vice Chairman of Teamlease Services and Pai is Chairman of Aarin Capital.