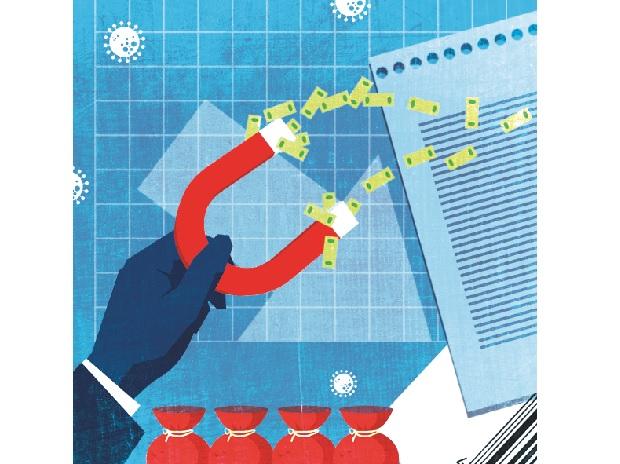 India’s fiscal deficit in the first quarter of 2021-22 stood at 18.2 per cent of the Budget Estimates (BE) against 83.2 per cent in the same period last year. This is less than half of last fiscal year’s level of Rs 6.6 trillion recorded during the pandemic induced-lockdown.

The controller general of accounts data showed the government received Rs 5.47 trillion (27.7 per cent of the corresponding BE 2021-22 of total receipts) up to June. This comprises Rs 4.12 trillion of tax revenues, Rs 1.27 trillion of non-tax revenues, and Rs 7,402 crore of non-debt capital receipts.

The expenditure incurred by the Centre was Rs 8.21 trillion (23.6 per cent of the corresponding BE 2021-22). The government could limit the fiscal deficit to an eight-year low of Rs 2.7 trillion mainly due to buoyancy in tax receipts and some contraction in revenue expenditure.

Besides, surplus transfer by the Reserve Bank of India (RBI) had helped attaining over half the target for non-tax revenue.

Reflecting the low base of the nationwide lockdown, gross tax revenues nearly doubled in the first quarter and reached 24 per cent of the BE, despite the impact of the second wave of the pandemic on economic activities. However, the government’s spending recorded a volatile trend on a monthly basis in the April-June period.

However, economists said the full-year fiscal deficit was expected to overshoot the BE of Rs 15.1 trillion in case the government missed the disinvestment target of Rs 1.75 trillion. Further, they cautioned a subdued rise in spending might dampen the pace of expansion of GDP in the first quarter of the fiscal year.

“The government has been slower on total expenditure, which includes even capital expenditure. In terms of the proportion of budgeted amounts, spending has been lower for fertilisers and roads, while that for agri and food has just about been maintained,” said Madan Sabnavis, chief economist, CARE Ratings.

After recording a 35.6 per cent contraction on a YoY basis in April, the Centre’s revenue expenditure expanded by 32.4 per cent in May and a lower 8.9 per cent in June, despite the gradual unlocking across various states.

“During Q1, the revenue expenditure of the government recorded a decline of 2.4 per cent, which absorbed the 26.3 per cent expansion in capital outlay and net lending, resulting in a total expenditure that was virtually flat. The subdued rise in the Centre’s spending is expected to dampen the pace of expansion in GDP in first quarter,” said Aditi Nayar, chief economist, ICRA.

She further said given the moderate growth of 9.5 per cent embedded in the government’s BE for gross tax revenues (relative to FY21 provisional), “we do not foresee a material undershooting of the targeted tax collection, even with some eventual reduction in excise duty on fuels”.

“In our view, the magnitude by which the government’s fiscal deficit in FY22 will overshoot the FY22 BE of Rs 15.1 trillion will depend on how much of the disinvestment target of Rs 1.75 trillion remains unachieved at the end of this year, and any other major fiscal stimulus measures that may be announced. At present, we expect the fiscal deficit to print at Rs 16.1-16.3 trillion in FY22, overshooting the BE,” Nayar added.

The receipts were 6.8 per cent of the BE at the end of June 2020. Non-debt capital receipts consisted of recoveries of loans worth Rs 3,406 crore and disinvestment proceeds of Rs 3,996 crore. Further, more than Rs 1.17 trillion was transferred to state governments up to June as devolution of the share of taxes.

The RBI surplus, on the other hand, provides a cushion to absorb the modest net cash outgo of Rs 23,670 crore under the first supplementary demand for grants, as well as some step-up in the outlay for vaccine procurement above the budgeted Rs 35,000 crore, which may be necessary to achieve early vaccine imports, said economists.