CJI N V Ramana: The former is what we fought for, the latter is an instrument of colonial rule. In the face of a pandemic, it’s important to reflect on how the tension between the two defines the quality of justice. 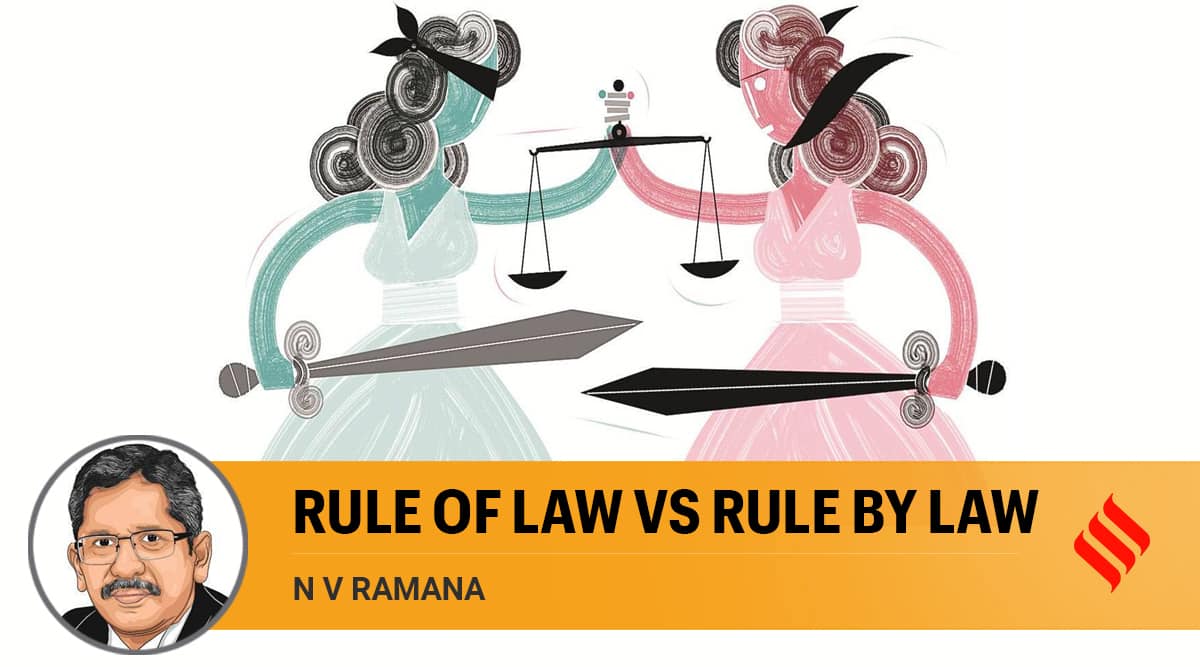 It has always been well recognised that the mere right to change the ruler, once every few years, by itself need not be a guarantee against tyranny.(Illustration by C R Sasikumar)

When talking about Rule of Law, it is necessary to first understand what the law is. Law, in its most general sense, is a tool of social control that is backed by the sovereign. However, is this definition complete in itself? I would think not. Such a definition of law makes it a double-edged sword. It can be used not only to render justice, it can also be used to justify oppression.

Renowned scholars have, therefore, argued that a law cannot really be classified as a “law” unless it imbibes within itself the ideals of justice and equity. An “unjust law” might not have the same moral legitimacy as a “just law”, but it might still command the obedience of some sections of the society to the detriment of others.

What is clear is that both these thoughts highlight certain facets of what is meant by the term “law”. I think that any law backed by a sovereign must be tempered by certain ideals or tenets of justice. Only a state that is governed by such law, can be said to have the Rule of Law.https://images.indianexpress.com/2020/08/1×1.png

The British colonial power… used the law as a tool of political repression, enforcing it unequally on the parties, with a different set of rules for the British and for the Indians. It was an enterprise famous for “Rule by Law”, rather than “Rule of Law”, as it aimed at controlling the Indian subjects… Our struggle for independence thus marked our journey towards the establishment of a state defined by the Rule of Law… A framework was needed to ensure this. The framework that forms the binding link between law and justice in this country. That is what “We the people” gave to ourselves in the form of the Constitution . . .

…More than 70 years down the line, the entire world is facing an unprecedented crisis in the form of Covid-19. At this juncture, we necessarily have to pause and ask ourselves as to what extent we have used the Rule of Law to ensure protection to, and, welfare of all of our people. I do not intend to provide an evaluation of the same. Both my office and my temperament prevent me from doing so. But I began to feel that this pandemic might yet be a mere curtain-raiser to much larger crises in the decades to come. Surely, we must at least begin the process of analysing what we did right and where we went wrong.

From within the perspective of legal positivism, many conceptions of Rule of Law have emerged… It would be relevant to emphasise four principles.

The first principle is that “laws must be clear and accessible,”…(that) the people at least ought to know what the laws are. There cannot, therefore, be secretive laws, as laws are for society. Another implication of this principle is that they should be worded in simple, unambiguous language.

The second principle relates to the idea of “equality before the law”… An important aspect of equality before law is having equal access to justice. This guarantee of equal justice will be rendered meaningless if the vulnerable sections are unable to enjoy their rights because of their poverty or illiteracy or any other kind of weakness.

Another aspect is the issue of “gender equality”. The legal empowerment of women not only enables them to advocate for their rights and needs in society, but it also increases their visibility in the legal reform process and allows their participation in it. Bias and prejudice necessarily lead to injustice, particularly when it relates to minorities. Consequently, the application of the principles of Rule of Law in respect of vulnerable sections has to necessarily be more inclusive of their social conditions that hinder their progress.

This leads me to the third principle, the “right to participate in the creation and refinement of laws”. The very essence of a democracy is that its citizenry has a role to play, directly or indirectly, in the laws that govern them. In India, it is done through elections where the people get to exercise their universal adult franchise to elect the people who form part of Parliament which enacts laws…

In the 17 national general elections held so far, the people have changed the ruling party or combination of parties eight times. In spite of large-scale inequalities, illiteracy, backwardness, poverty and alleged ignorance, the people of independent India have proved themselves to be intelligent and up to the task. The masses have performed their duties reasonably well. Now, it is the turn of those who are manning the key organs of the state to ponder if they are living up to the constitutional mandate.

It has always been well-recognised that the mere right to change the ruler, once every few years, by itself need not be a guarantee against tyranny. The idea that people are the ultimate sovereign is also to be found in notions of human dignity and autonomy. A public discourse that is both reasoned and reasonable is to be seen as an inherent aspect of human dignity and hence essential to a properly functioning democracy. As Julius Stone observed in his book, The Province of Law, elections, day-to-day political discourses, criticisms and voicing of protests is integral to the democratic process.

The idea of the judiciary, as a “guardian” of the Constitution, brings me to the fourth and final principle: The presence of a “strong independent judiciary”.

The judiciary is the primary organ which is tasked with ensuring that the laws that are enacted are in line with the Constitution. This is one of the main functions of the judiciary, that of judicial review of laws. The Supreme Court has held this function to be a part of the basic structure of the Constitution, which means that Parliament cannot curtail the same.

But the importance of the judiciary shouldn’t blind us to the fact that the responsibility of safeguarding constitutionalism lies not just with the courts. All the three organs of the state, i.e., the executive, legislature and the judiciary, are equal repositories of constitutional trust. The role of the judiciary and scope of judicial action is limited, as it only pertains to facts placed before it.

This limitation calls for other organs to assume responsibilities of upholding constitutional values and ensuring justice in the first place, with the judiciary acting as an important check.

For the judiciary to apply checks on governmental power and action, it has to have complete freedom. The judiciary cannot be controlled, directly or indirectly, by the legislature or the executive, or else the Rule of Law would become illusory. At the same time, judges should not be swayed by the emotional pitch of public opinion either, which is getting amplified through social media platforms. Judges have to be mindful of the fact that the noise thus amplified is not necessarily reflective of what is right and what the majority believes in.

The new media tools that have enormous amplifying ability are incapable of distinguishing between right and wrong, good and bad and the real and fake. Therefore, media trials cannot be a guiding factor in deciding cases. It is, therefore, extremely vital to function independently and withstand all external aids and pressures. While there is a lot of discussion about the pressure from the executive, it is also imperative to start a discourse as to how social media trends can affect the institutions.

The above, however, should not be understood as meaning that judges and the judiciary need to completely disassociate from what is going on. Judges cannot stay in “ivory castles” and decide questions that pertain to social issues.

The oath we took, to perform our duties “without fear or favour, affection or ill-will,” applies equally to governmental and non-governmental entities. The ultimate responsibility of a judge is, after all, to uphold the Constitution and the laws….

I am taking the liberty to quote in Telugu, Maha Kavi Gurajada Appa Rao, a great poet and reformist of the 19th/20th Century. He said: “Desamamte matti kadoi, Desamamte manushul oi.” Gurajada gave a universal definition to the concept of nation. He said “a nation is not merely a territory. A nation is essentially its people. Only when its people progress, the Nation progresses”.

The writer is the Chief Justice of India. These are edited excerpts from the 17th Justice P D Desai Memorial Lecture he delivered on June 30.